Rob Riggle, one of the most recognizable Jayhawk alumni, will be honored this year with the Distinguished Alumni Award from the College of Liberal Arts & Sciences at the University of Kansas. He will visit Lawrence in November to accept the award.

Riggle has forged two distinct and notable careers since graduating from KU in 1992 with a B.A. in theatre and film. Following a career with the United States Marine Corps during which he rose to the rank of Lieutenant Colonel, Riggle has become well-known in comedic films and television. Riggle is familiar to filmgoers and TV fans alike for comedic roles in films such as “The Hangover” and “Step Brothers,” as well as his stints on “Saturday Night Live” and as a correspondent on “The Daily Show with Jon Stewart.” His most recent film appearance is in “Night School” with Kevin Hart, which was released this fall. On the small screen, Riggle created and stars in “Rob Riggle’s Ski Master Academy,” available on Sony Crackle. For his voice-over talents, he earned a 2012 Emmy nomination for Outstanding Voice-Over Performance for Disney’s “Prep & Landing: Naughty vs. Nice.” Riggle is also known for his philanthropic efforts and as an enthusiastic fan of KU.

“Rob Riggle’s accomplished and varied career exemplifies the many paths open to graduates with a well-rounded education in the liberal arts and sciences,” said Clarence Lang, interim dean of the College. “We are pleased to recognize him and welcome him back to campus.”

The College hosted “An Evening with Rob Riggle” on Friday, Nov. 2, at the Burge Union. Watch the live stream here: 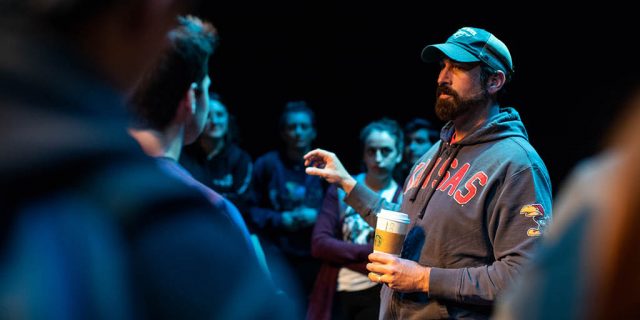 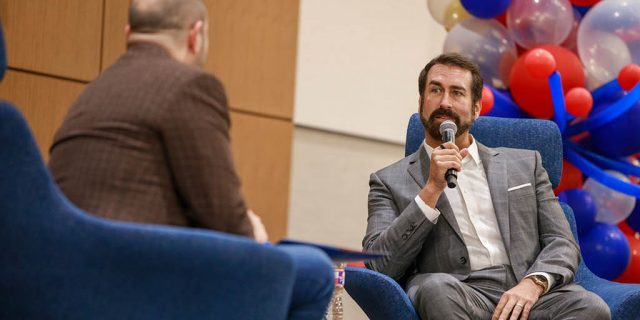 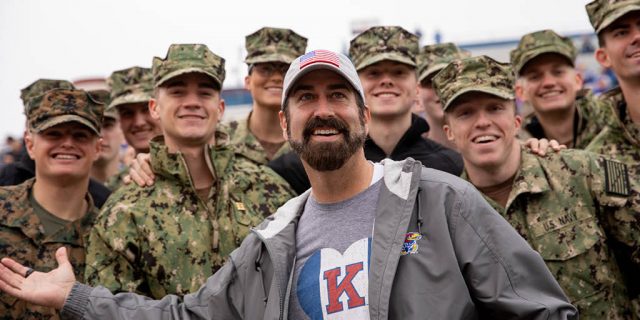 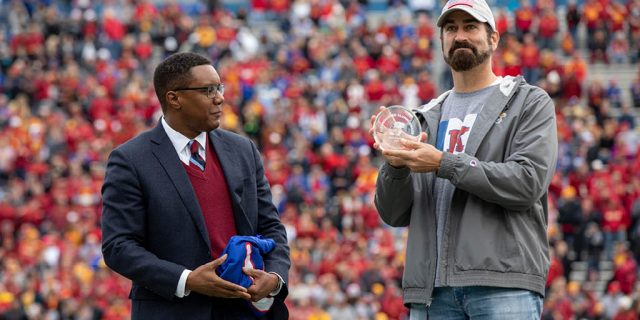 Q & A with Rob Riggle

Your post-KU career has included time in both the military and entertainment. What did your options look like when you were graduating?

When you graduate from anywhere with a theater & film degree you’re most likely going to be waiting tables when you start out. It’s just the way it goes if you want the flexibility to make auditions and be in productions. I however, had my pilot’s license when I was in undergrad and took a test called the AQTFAR and scored well enough to attain a guaranteed flight contract with the Marine Corps. So for me, when I graduated it was either wait tables or Top Gun. Now, with regard to my degree, I wouldn’t change a thing. 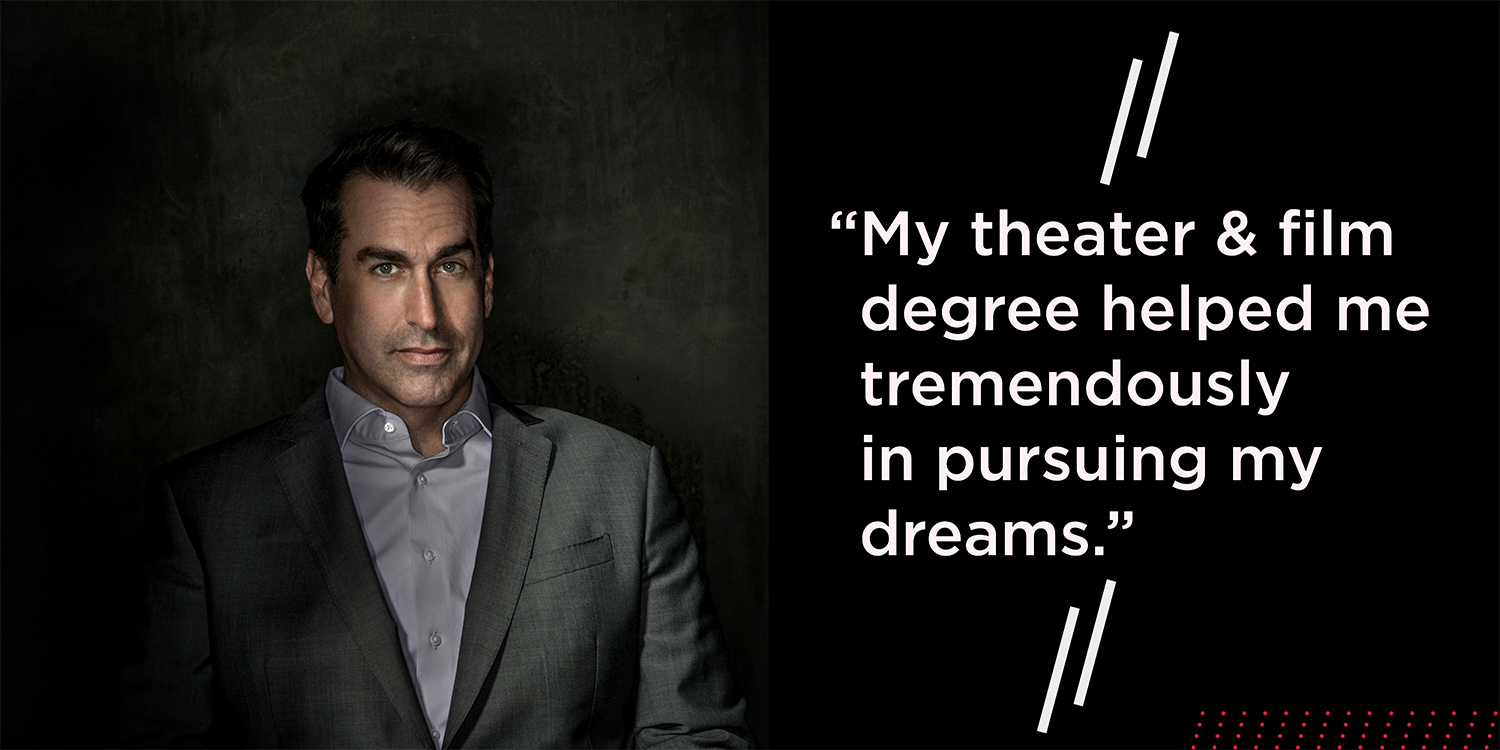 One of the benefits of a liberal arts and sciences degree we emphasize with students most often is flexibility. As someone who has pursued many pathways and has a multi-faceted career, how have you observed this flexibility play out in your own career?

Unless you’re going to specialize in a certain field, like medicine or accounting, I think you should seek an education that is well rounded. You should seek social and emotional intelligence as well as academic intelligence. It’s great to be accurate when “crunching the numbers” but if you can’t communicate effectively or inspire others, you’ll probably never be a leader in your chosen field.

What are you most proud of, personally and professionally?

Personally: My children. They are smart, wonderful, kind, inquisitive and fun. That’s something that my wife and I helped with … I’m pretty sure. 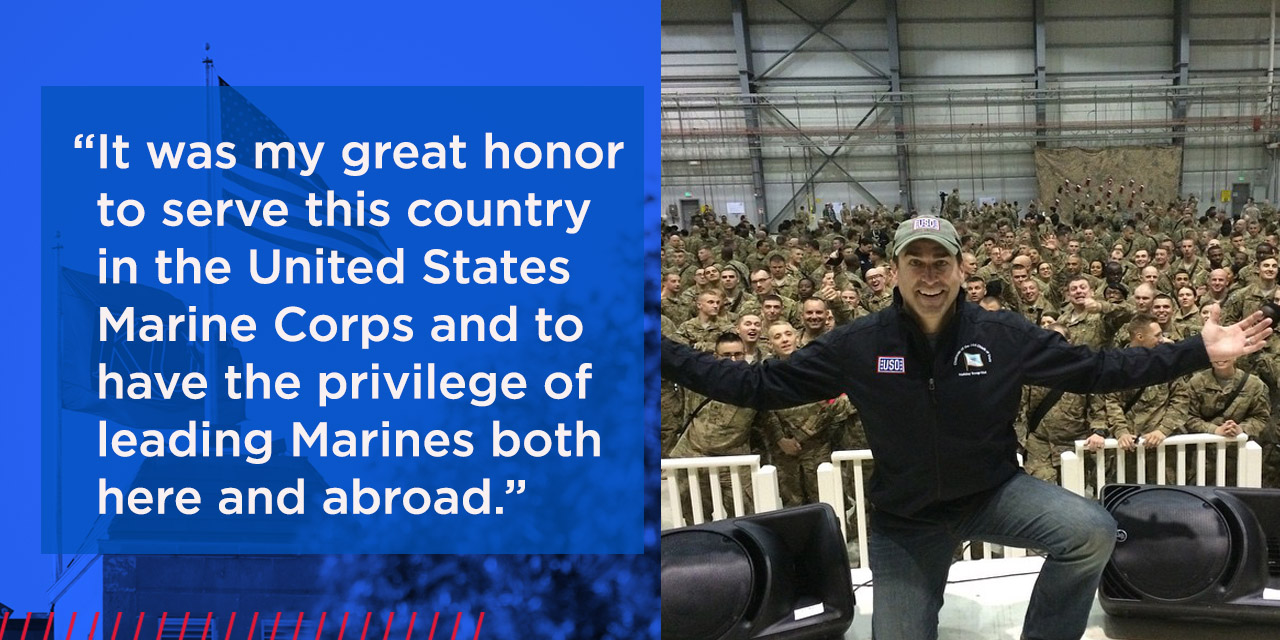 I’m also grateful to have the opportunity to pursue my dreams. I’m grateful that I get to write, act and perform comedy for a living.

Why do you think comedy is important for the world?

What is the biggest challenge you’ve faced in your career?

I’ve had more than one career. So, in the Marines, it was serving overseas and leading Marines in a variety of combat zones. In show business, it’s getting knocked down all the time and getting back up. If you choose a life in the arts, you’re going to be judged and rejected in a very cruel and subjective way. It can hurt. You’ve got to be really clear on why you’re doing something so when you get knocked down, you can get back up. Time after time … after time.

What KU experience has been most influential in your life? 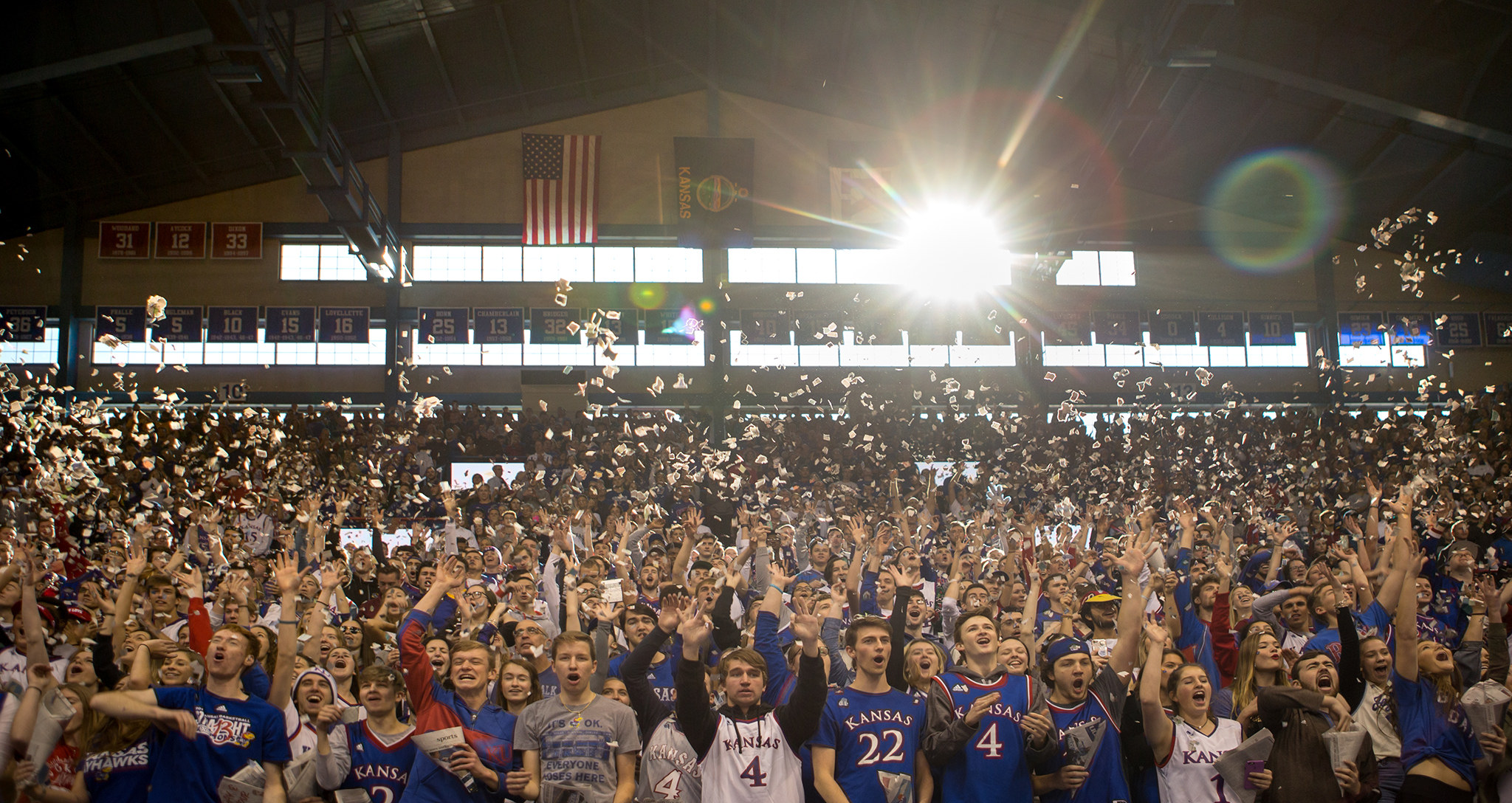 What is the last thing you read for fun?

It was a book by Michael Rapaport called “This Book Has Balls.” I ran into Michael in New York City recently and we were both on press tours for different projects. He was promoting his new book and I was promoting my new show. He was kind enough to give me a copy and so I read it. It’s hilarious. It’s a series of short stories and sports rants, told as only Michael can tell.

As the largest academic unit with the most alumni, students and faculty, the College of Liberal Arts & Sciences is the heart of KU. The College has recognized more than 50 liberal arts and sciences graduates with its Distinguished Alumni Award since 1996. Alumni have been honored for accomplishments across a span of career paths, including public and military service, business, arts, medicine, entertainment and publishing, and research. The full list can be viewed at http://college.ku.edu/distinguished-alumni.