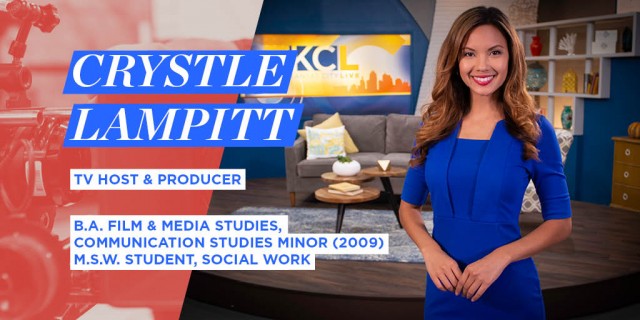 Why Crystle’s a Hawk to Watch:

Crystle Lampitt’s road to hosting and producing for television was not without a few twists and turns. After years spent overseas, traveling across the globe from South Africa to Hong Kong and Australia, pursuing modelling jobs, bartending, editing documentaries, and teaching pre-school, she returned to Kansas City with scarce finances and an inconsistent work schedule. Trying to make ends meet, she took a chance on a part-time gig hosting for KMCI. It payed off. And in that opportunity, and the individuals she crossed paths with, Crystle found inspiration to make a difference in her community by giving voice to its people through news and the power of storytelling.

Go behind the scenes with Crystle and see how her career in media allows her to tell stories of community and compassion, leading to connections on and off the air.

I am a TV Host and Producer. I host a daily, live morning show called “Kansas City Live” on Channel 41 (KSHB or 41 Action News), and I host and produce a weekly music series called “Behind the Spotlight,” that airs on Channel 38 (KMCI or 38 the Spot).

How did you end up doing what you do? Was there a certain moment when things came together? Or was it a longer journey?

My journey to becoming a TV host and producer had a lot of twists and turns and a few distractions thrown in for good measure, but there was always an underlying desire to learn, connect with others and make a difference. In my first year of undergrad I was offered a modeling contract in Singapore for 3 months, so I sped through that first year to take it. From that point forward, I attended regular classes in Lawrence during the school year, then spent my summers overseas wherever I could score a contract while taking online classes. 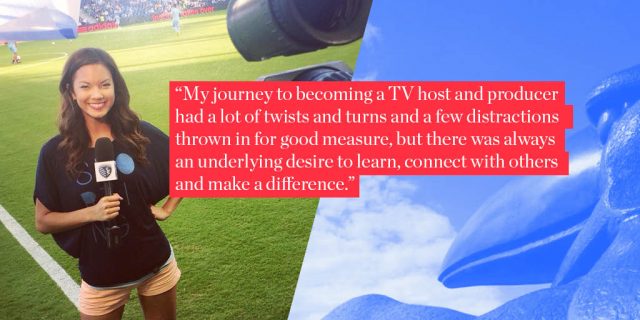 I graduated early so I could pursue a full-time modeling career that took me to South Africa, Hong Kong, the Philippines, and Australia. The work wasn’t always consistent, so I took side jobs wherever I could—I bartended, and I edited TV pitch reels remotely for a documentary filmmaker—and I also ended up finding full time work as a preschool teacher in Sydney, Australia, due to my previous experience nannying and working as a teacher aide while a student at KU. It was a fun and challenging job, but I eventually had to come back to the States as my work visa was close to expiring.

When I came back to Kansas City after years overseas, it felt like a totally different city. I had little money to my name and I needed some consistency in my life. Thus, I moved into my parents’ basement and took on more hours editing TV show pitch reels and freelancing as a videographer. Around this same time, there was an open casting call for a hosting position at Channel 38. I went on a limb and showed up to the casting along with 1,000 others, and, after 3 months of interviews, writing tests, screen tests, and more, the job was mine! It was part-time, but it was something. So, I continued working in production, modeling, and nannying, while hosting for 38 to make ends meet. 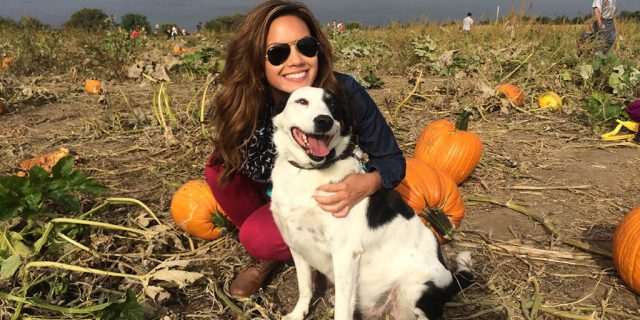 Eventually, the job at 38 expanded to full time, and I also became a fill-in host for the morning show on Channel 41, a fill-in digital reporter for the 4pm newscast, and the entertainment reporter for the 7am newscast. Now, I host the 10am morning show daily and I host and produce a weekly series featuring local and national music artists. I get to interview so many interesting artists, entrepreneurs, authors, athletes, and more. One of my favorite things about my job now is getting to spotlight nonprofit organizations and individuals in Kansas City who are truly making the world a better place. I am inspired by other people’s enthusiasm and I love sharing positive stories with our viewers each day.

I am also currently pursuing a Master of Social Work at KU to expand on my work in media and the community.

I feel my biggest achievement is not linked to money or a title, but a moment. One day I was shopping at Target and a woman came up to me to tell me that she loved my work and that she and her 12-year-old daughter enjoyed watching me every day. She felt I was a positive influence in her children’s lives. That really touched me. I will never claim to be a perfect paragon of virtue, but to hear that a complete stranger thought of me as a role model for her daughters made me feel like I was doing something worthwhile. 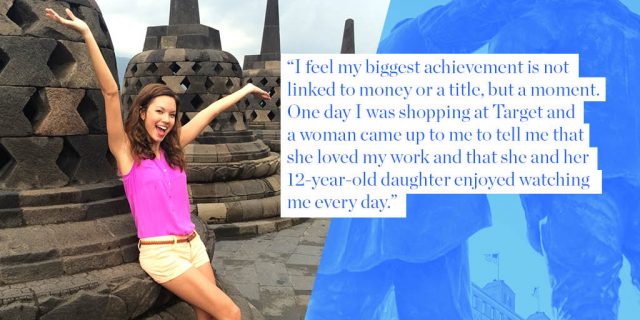 There was a time that I was working day and night while going through some health issues, and just barely sleeping or taking care of myself. I had volunteered to take on more than I should have at work, while trying to keep up with my community volunteer activities on my own time and it was all wearing me down. After one particularly difficult taping of our music show, Behind the Spotlight, some of my colleagues gave me a harsh critique. I simply had no free time to focus on my growth and creativity and I was struggling to come up with original content ideas at that time. The pressure to appear perfectly put together while juggling all my behind-the-scenes work with my on-camera work, and community appearances was just too much. My personal life and health were suffering greatly because I wanted to “do it all.” I remember saying out loud to a manager, “Maybe I’m not cut out for this.” I thought my TV days were coming to an end. It was a reality check. Improving my situation necessitated some difficult talks about my job responsibilities and where I could cut back. I had to learn to say NO to many obligations and opportunities, because I simply could not be everywhere at once.

I would love to continue working in television as a host and producer, spotlighting the important stories that affect our community. I’d also like to be a part of that story by increasing my involvement with community organizations that promote diversity, inclusion, and peace. Whether that’s through my media work, and/or work in a clinical setting following my graduate program, I will always challenge myself to connect more, understand more, and do more. I love people and all their passions and idiosyncrasies, so I hope to continue learning about others while becoming a more tolerant individual myself. 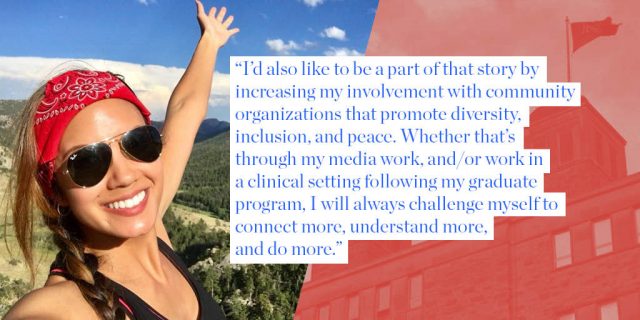 “Try your best to enjoy the journey. You will not wake up one morning feeling like you’ve just ‘figured it all out,’ so you may as well make time for joy and gratitude every day.”

Also, “You’re literally allergic to everything in the air except for dog dander and that is why you’re sick most of the time. Start getting allergy shots stat!”

Don’t be afraid to take a risk. Even if it seems unlikely that you’ll get a job, a promotion, etc., it never hurts to try. Plus, you never know where a seemingly unconnected opportunity or connection will take you later.

Becoming a strong writer is essential for working in TV. I think the Film and Media program taught me discipline and critical thinking, which in turn strengthened my writing/communicating skills. Whether that was in the form of writing a research paper or a script, or just forming cohesive ideas to pitch as a story, it was important for me to practice my writing skills in school to be able to do what I do now. 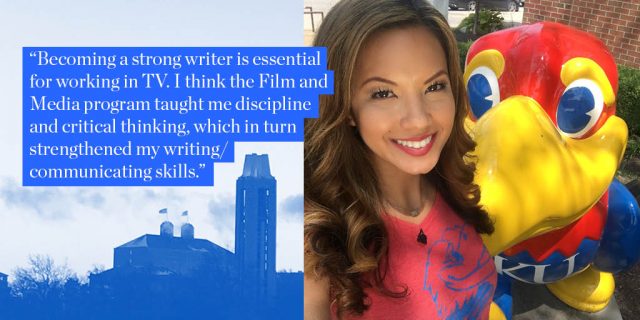 My favorite thing to do is eat. Indonesian food and American comfort food (mac and cheese!) make me happiest. I also love being outdoors and doing yoga, and watching “Friends” reruns with my dog, Kira. I’m close with my family, and we regularly get together to eat and play with my nephews. When I’m near a body of water, I enjoy scuba diving (not very often given my present geographic location)!

I was born in Cairo, Egypt, and raised mostly in Indonesia before moving to the States in middle school. I speak Indonesian and English and still visit my family overseas frequently.

Be like Crystle and “enjoy the journey” wherever it may lead. For more information, visit Kansas City Live, KSHB, and 38 the Spot. Also, explore the Department of Film and Media Studies and the Department of Communication Studies at the University of Kansas.