What are your research interests and why did you choose them?

My primary area of study is Greek tragedy. As an undergrad, I studied both theatre and philosophy of religion and was drawn to the classic philosophers of both ancient Greece and early Christianity. At first, I considered my interests in theatre and religion as mutually exclusive, but overtime, the lines between the two blurred. The difference between “theatre” and “religious ritual” is a matter of perspective. Greek tragedy is considered the foundation of Western theatre, and yet it is often studied detached from its religious roots. It’s because Greek tragedy is so foundational to Western drama that I think it provides the opportunity to challenge our distinctions between “theatre” and “religion.”  Most of the productions of tragedy I enjoy really embrace the religious dimension of the work.

Tell us what your PhD thesis is in under 200 characters: 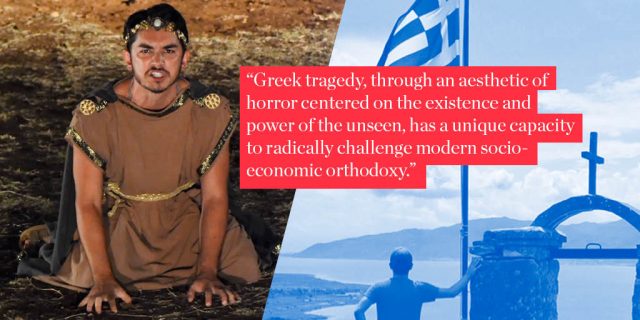 What is one thing you think everyone should know about your research project or research interests? This might be a commonly held belief that your research questions or complicates.

One thing my research hopes to show is that Greece is still place, and that these tragedies are an integral part of its modern culture as there are many festivals held in ancient amphitheaters to this day. Ancient Greek work is often studied as a monolith with little regard to a modern Greek world. This is most obvious in the fact that KU has a program in ancient Greek language but not Modern Greek. Ancient Greece is considered the foundation of Western civilization, yet it has very little in common with the modern West. Tragedy is not Western, it is Greek. It was then, and it still is.

What advice would you give students applying for research funding opportunities?

Be specific. Every time I have been turned down for a funding opportunity it is because I did not give enough detail. This lack of detail is generally a pretty good indicator that I have not fully thought out the research I am asking to be funded.

Have you pursued degrees from KU other than the program you are in now? If so, what was the focus of your research? How do your various areas of interest complement one another? 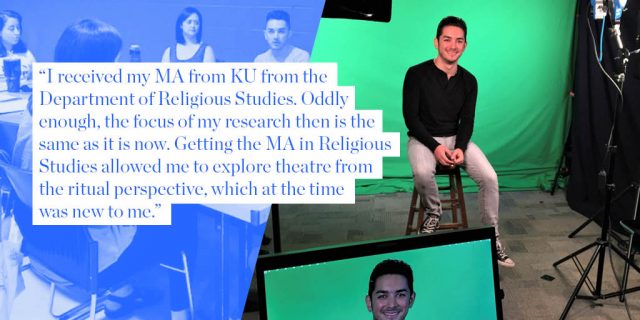 During my MA I wrote about the director and acting theorist Tadashi Suzuki, who adapted many works of Greek Tragedy using his unique acting method. Suzuki’s Greek tragedies are something that is still a large portion of my research.

Give a shout-out to a professor, mentor, advisor, or someone at KU who has helped you?

Dennis Christilles is my advisor, and the absolute best. I am really happy to have gotten to work with him in a variety of capacities: I am his GTA for the department’s study abroad trip to Greece, I have collaborated on conference papers with him, he is currently working with me on the department’s production of Electra. His support is the reason I have gotten to do anything since being in the department.

What is the most valuable experience you have had while studying at KU?

Studying at KU is what allowed me to begin traveling to Greece for research. I am the GTA for the Summer Theatre in Greece program with Dennis Christilles and have traveled there on my own as well. Getting to travel there, learn the language, see shows, and make friends, has added a layer to my work that I could not have gained anywhere else.

Please tell us a bit about your work with Kansas City Public Theatre. What is its mission, and how did you get involved? Are you involved with any other performing arts groups?

Kansas City Public Theatre is a non-profit theatre company that I co-founded with my wife Elizabeth Bettendorf Bowman. Our mission is to provide access to the arts through year-round theatre entertainment free of charge to the public. By providing our work for free, we hope to use theatre (in various formats) to engage the community and increase civic awareness. We produce several shows a year, usually in non-traditional spaces, and have several community engagement programs. Our most recent production was my adaption of the Greek tragedy Medea. You can check us out at kcpublictheatre.org!

Prior to founding KCPublic, I worked for seven seasons at Kansas City Repertory Theatre in various capacities, first as a scenic carpenter, then as stage supervisor of their Copaken Stage, and most recently as the Assistant Director of their production of the musical Sweeney Todd. Aside from KCRep, I also participate in actor training exercises with New York based SITI Company.

What can you tell us about your band, Attic Light, and your experiences performing as a musician? 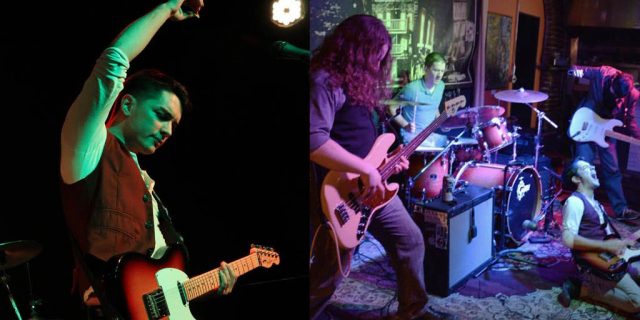 I am the singer, guitarist, and songwriter of the band Attic Light which I formed six years ago. Music and theatre have always gone hand-in-hand for me. I compose music for all the shows I direct, and theatricality is something I try to bring to Attic Light. With Attic Light, I have had the pleasure of traveling throughout the country to play shows and radio stations, recording in Nashville, and meeting a lot of talented musicians and new friends. You can check us out on most social media platforms @atticlightmusic including Facebook, Twitter, Instagram, music videos on Youtube, and our website atticlightmusic.com.

What do you plan to do after you graduate from KU?

After graduation, I hope to continue teaching theatre classes at an area university while working with Kansas City Public Theatre to produce accessible theatre in Kansas City.

Be like Nathan. Take a starring role in whatever you love to do. More more information, see Kansas City Public Theatre and Kansas City Repertory Theatre. For all things Attic Light, check out the band’s Facebook, Twitter, Instagram, music videos on Youtube, and website. Also, see more from the Department of Theatre & Dance and the Department of Religious Studies at the University of Kansas.