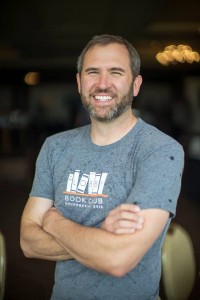 Last year, Forbes magazine proclaimed “That ‘Useless’ Liberal Arts Degree Has Become Tech’s Hottest Ticket.” Increasingly, reports show that creative thinking has become just as valuable as engineering skills in the industry, and for the former, more tech employers are seeking out liberal arts and sciences graduates. Brad Garlinghouse, a KU alumnus who is a veteran of the tech sector, has put his liberal arts and sciences background to use for two decades in Silicon Valley. And he’s building a talent pipeline from KU to California to encourage other Jayhawks to join the tech industry.

Brad has held senior positions at some of the nation’s most well-known tech companies, including AOL and Yahoo. He is currently chief operating officer of Ripple Labs, an online payment and exchange network. He has many years of experience working with startup companies and was CEO of Hightail, a file-sharing site. He’s also known in the industry for authoring the “Peanut Butter Manifesto,” a philosophy of efficiency he wrote during his tenure at Yahoo that he has since brought to other companies. The KU College of Liberal Arts & Sciences named Brad as one of three Distinguished Alumni for 2015-’16.

We caught up with Brad to learn more about his career and his devotion to KU.

How would you describe your current occupation?
I’m the president and COO at Ripple, which is a financial technology startup located in San Francisco. We’re working towards enabling the Internet of Value, meaning that financial transactions will settle as quickly and seamlessly as emails get sent now. One of my jobs at Ripple is to help foster a successful culture. We are putting world-class talent to work on a huge project: updating the world’s most basic financial systems.

How did you discover your career?

Long before joining Ripple, I knew I wanted to be a part of something that could (please indulge the cliché) change the world. We’re living in an amazing time, when almost anyone can say that and mean it. I never wanted to work somewhere that was focused on doing things the way they’ve always been done. I discovered that I always want to be looking for the next thing, rather than getting comfortable in what I’m doing today.

My favorite KU memory is…

Attending a concert by The Samples at Benchwarmers on Halloween. I remember the fire alarm and the sprinklers went off and the place went crazy… but the show continued nonetheless. I’ll never forget it.

How have you stayed connected to your alma mater?

Every year I, and a few other KU alums, organize a Tech Trek event for about 20 KU students looking to enter the technology field after graduation. We bring them out to Silicon Valley and get them in front of some companies like Google, Samsung, Facebook and LinkedIn. Every year that we’ve done it, it’s been a huge success and the students seem to take a lot away from it. We’ve already started planning for Tech Trek 2017!

What was the last thing you read for fun?

“Flash Boys: A Wall Street Revolt,” by Michael Lewis. It’s a great insider story that really shows you how the market affects everyone.

Who would you invite to your dream dinner party?

David Brooks to talk. Jon Stewart to laugh. Mario Chalmers (needs no explanation).  Bill Self to talk about how he breeds excellence.