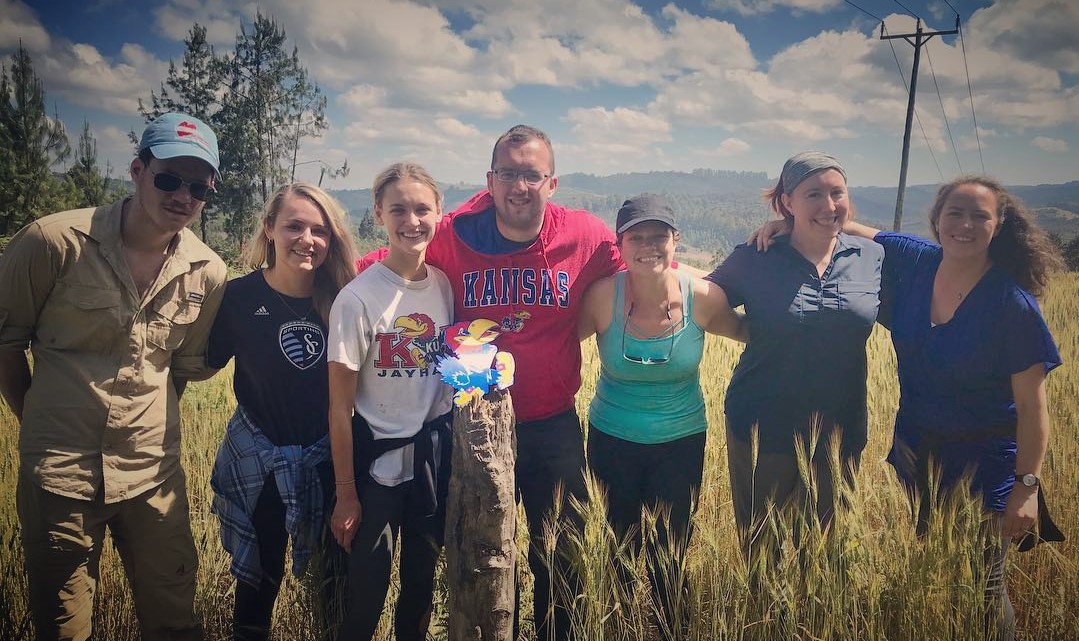 On August 7th, seven Jayhawks and their professors and mentors waved the wheat with smiles to match the sun’s rays in the Tanzanian Southern Highlands, hundreds of miles from the coastal metropolis of Dar es Salaam. Spotting a landscape familiar to Kansans, the group

paused for a quick photo on the edge of a wheat field just outside the town of Mufindi. Rolling hills surrounded the group as they reflected on the life-changing experiences of the past week. During the trip, new friendships were formed and partnerships with Tanzania-based KU alum were kindled, as these Jayhawks put years of Kiswahili language and African Studies coursework to use.

Each person took something different away from the trip, but the group were united under a shared umbrella project: ColLAB: Bridging East Africa’s Digital Health Divides. Commonly referred to simply as ColLAB, the project brings together scholars from across the University of Kansas and funding from several sources with a goal of studying health care access and capacity in rural contexts, as well as developing online content for KU’s Community Tool Box in Kiswahili for use by East Africans in their communities.

Read on to follow the group’s amazing journey in Tanzania, and the project’s transformation from an idea to the first-ever KU humanities laboratory.

The journey to Mufindi from across the world

The journey to Mufindi began on July 30th, when seven KU students and four faculty and staff members set off from different parts of the world. Emily Riley, assistant director of the Kansas African Studies Center, departed from Dakar, Senegal where she had been laying the groundwork for a future research project focused on female politicians looking to run in the Senegalese presidential election in 2019. She also checked in with two KU Foreign Language and Area Studies fellows who were studying Wolof at the West African Research Center. The others left from Kansas City, Newark, and Oslo, Norway, taking a range of trains, planes and automobiles to get to Tanzania.

For some, layovers en route to Tanzania also offered an opportunity to experience a new region of the world. Macie Rouse, an undergraduate student majoring in anthropology, stopped off for a day in the United Arab Emirates with Symantha Dawson, a graduate student in anthropology, and Katie Rhine, an associate professor of anthropology and co-director of ColLAB. “We visited the Sheik Zayed Mosque, which is the largest Mosque in the UAE, and then went on a desert safari tour where we rode across sand dunes, went four-wheeling, and had a bbq under the stars. This was my first time in the UAE, so I was happy to see the country, even if it was for a short time,” Macie said.

Once the group arrived in the the bustling coastal city of Dar es Salaam, they had a chance to take in the sights and sounds and meet up with KU alum Walter Bgoya (’65, Economics and Political Science)–a Tanzanian diplomat, activist, and director of Mkuki na Nyota Publishers. Next, they began their journey to the Iringa region via a very small plane!

Language, learning, and research in action 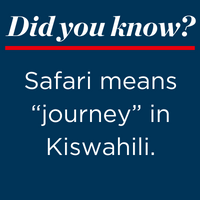 To prepare for the trip, the students were required to have taken Kiswahili for a year or more. Four of the students were awarded the prestigious Title VI Foreign Language and Area Studies Fellowship, which gave them a full scholarship to focus on developing their language skills during the summer through KU’s Summer African Language Institute. In this institute, participants receive a whole year’s worth of Kiswahili instruction in just eight weeks.

The faculty and students also participated in the lab’s “proseminar” to prepare for the cultural differences and inequalities they would encounter in rural Tanzania. They also worked to develop preliminary questions to research in East Africa. These topics, Rhine said, span “everything from how first aid is learned and taught, to how gender and gender-based violence are addressed through community-organization programs, to the ways in which the Kiswahili language is used to shape HIV prevention campaigns, and how mobile-phone apps may better help women live with HIV and improve maternal health outcomes. We see this as a first step for these students. Maybe they will develop thesis projects and go into graduate programs. Several of them ultimately plan to work for governmental and nongovernmental agencies that promote global health and development. In these occupations, just like in business and medicine, foreign languages and field experience are critical.”

Macie Rouse, a junior majoring in anthropology, reflects on her experience

“The most memorable experience of participating in the field school was meeting and learning about different people. This was my second time traveling to Tanzania. The ColLAB experience was much more enriching than my first trip, because I knew more about the culture and was able to speak the language. By using the small amount of Kiswahili I knew, I was able to make new friends and connect with people on a deeper level. I learned about their lives, and they learned about mine.

Laurencia Kamata and I became very close. She teaches hotel services at the local vocational university in Mufindi, Tanzania.  During our various breaks throughout the day, we would sit outside and talk about our families, our work, and what life is like in Tanzania and the U.S. I learned she is a singer in her free time, has one son, and has parents who live on the coast who would teach me how to fish. I was able to create similar friendships with other Tanzanians. Because of this, I learned a lot about the culture of Tanzania, and was able to share about my culture as well. I now know when I return to Tanzania, I will have many friends to reconnect with.” 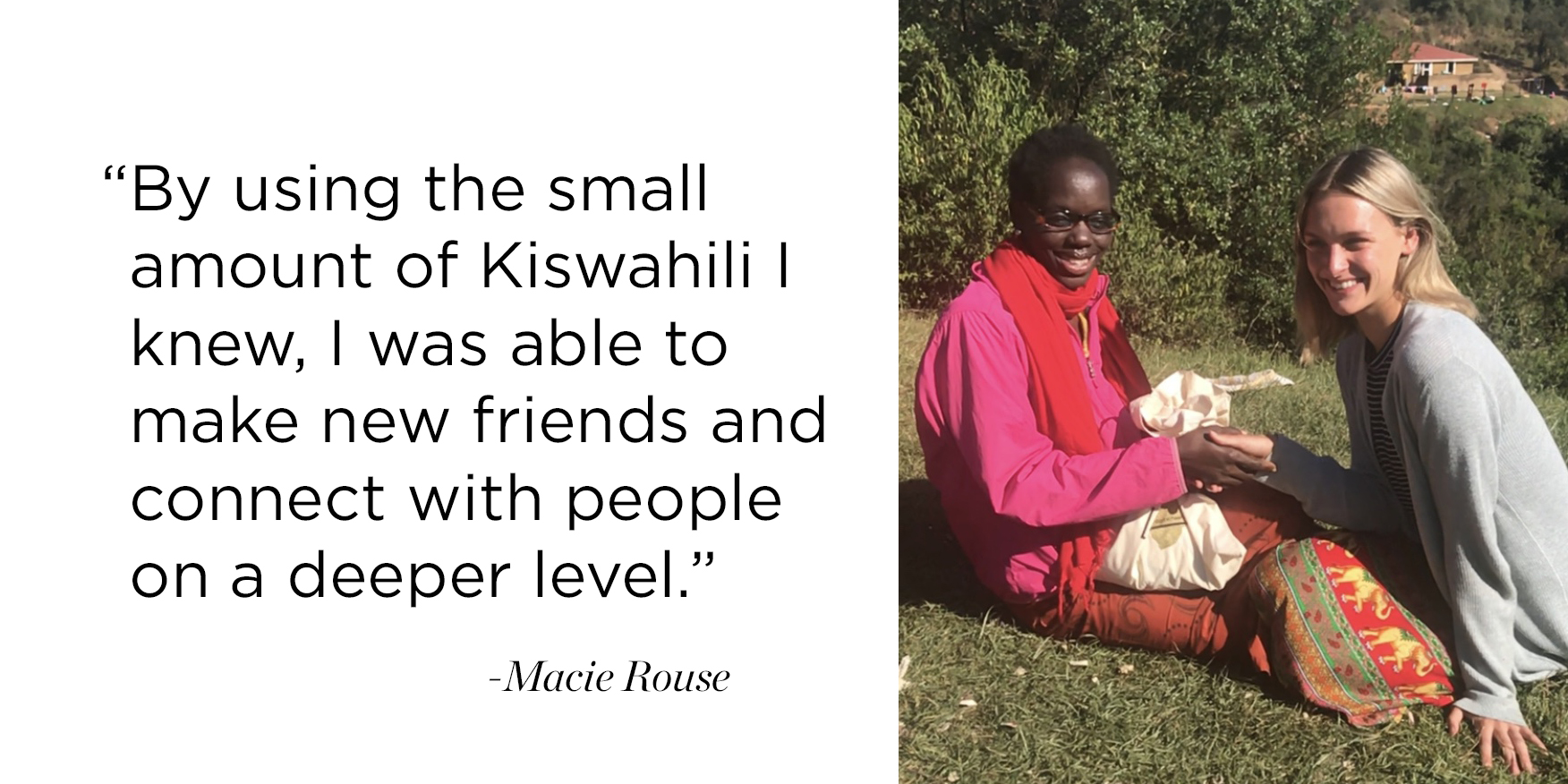 “The most valuable lesson I learned from being part of the ColLAB project is not to be scared to go out of my comfort zone. When I arrived in Tanzania, I was extremely nervous to use my Kiswahili. I thought people would judge me for not saying the correct thing, or become impatient when I had to speak slowly. I ended up finding the opposite to be true.  When I spoke Kiswahili, people were eager to help. They engaged with me, taught me new vocabulary, and spoke at a slower pace so I could understand. We laughed when I made mistakes, and were excited when we could understand one another. By the end of the trip, I was comfortable with my language skills, and had made many new friendships because of it.”

Macie, who has a part time job as a choreographer and dance coach in Overland Park, teaches some moves at the farewell party

On August 5th, the group visited the Mdabulo Health facility. They learned about how challenging it is to promote family planning—especially condoms—when condoms are almost always associated with HIV and unable to be distributed in a Catholic clinic like this. They may be purchased in local dispensaries but are rarely asked for using the word condom. Instead, community members use local terms and slang to refer to them. While posters like those in the photo montage below are often disregarded, the students learned how community education meetings that couples attend together are making a difference. 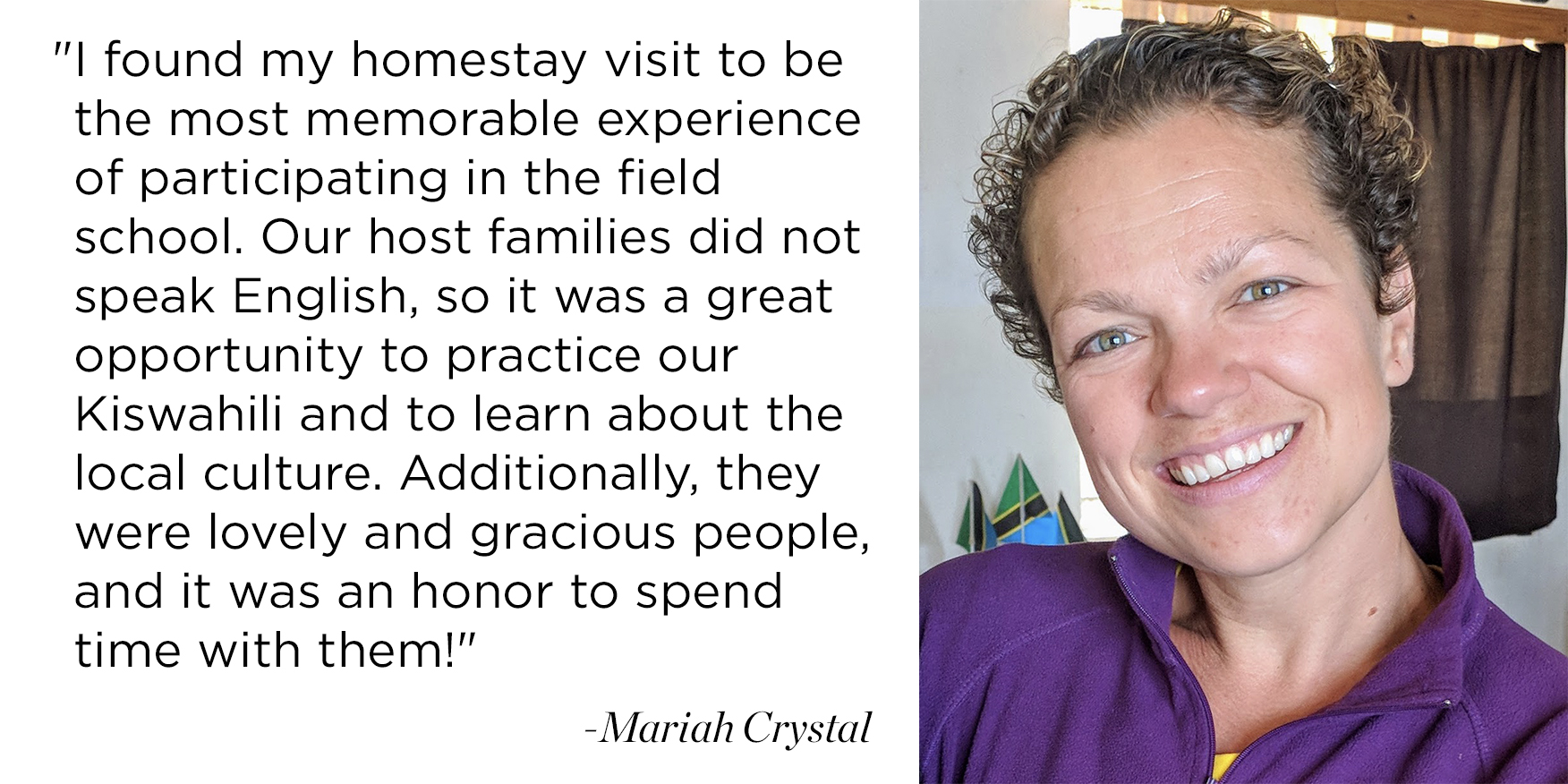 “Being a part of the ColLAB project re-confirmed the importance of being flexible, resilient, open to new and different opportunities, and to being respectful and open to local leadership and aware of power dynamics and our own positionality,” Mariah added.

The long journey to Mufindi, an idea realized 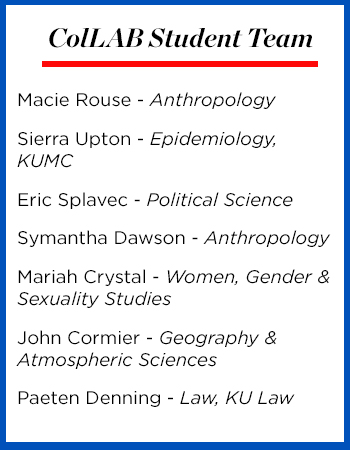 The journey to Mufindi actually started several years ago when a group of KU faculty and staff got together to talk about developing an initiative that would bring faculty, undergraduates, and graduate students together on a project bridging the humanities and sciences. In 2015, Elizabeth McGonagle, director of the Kansas African Studies Center and associate professor of history and African & African-American studies, visited KU alum Geoff Knight and Jenny Peck in Mufindi at the NGO, Mufindi Orphans, to discuss the possibility of organizing a study abroad program at the site. An initial grant of nearly $100,000 from the National Endowment for the Humanities in 2017 to create a “Health, Languages, and Humanities in the World” experiential learning curriculum in the School of Languages, Literatures & Cultures set the wheels in motion. That same year, the Hall Center for the Humanities at KU issued a call for a first-of-its-kind “lab” in the humanities. McGonagle and Rhine teamed up with the lab’s third co-director, Peter Ojiambo, associate professor of African and African-American Studies to propose and win the grant. This award provided funds to implement this innovative model of collaborative research.

“Taking the Kiswahili language students to Tanzania for first-hand research and work with communities was incredibly exciting,” Rhine said. Students in the project were given $3,000 each to help cover the cost of the trip. “International travel is massively expensive, but there’s really no substitution for students who need these skills.”

There is a payoff, Rhine said, for students participating in the project that they won’t get in the classroom: 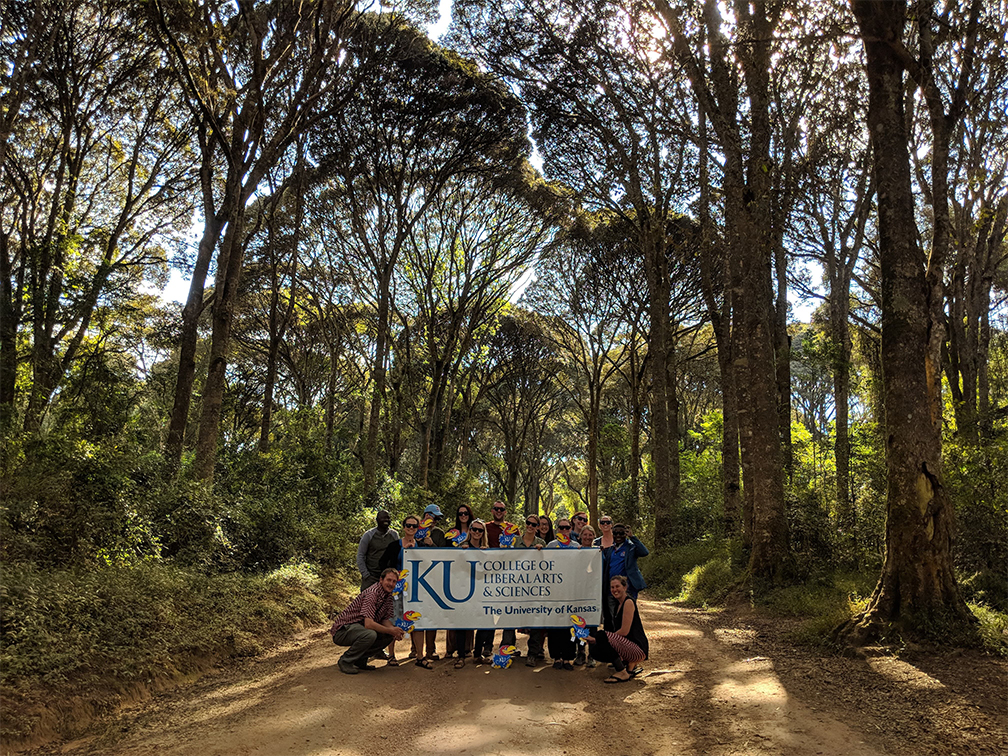 After leaving Mufindi, all of the ColLAB participants enjoyed their last weekend in Zanzibar, learning about the history, politics, religion, architecture, and the language of coastal Swahili people. They visited Mnazi Mmoja Hospital where they discovered more about the global flows of expertise–from as far as China and Cuba–that shape clinical medicine in this region. And finally they took a tour of the School of Kiswahili and Foreign Languages at the State University of Zanzibar, where foreign students can study abroad and take advanced coursework in the language.

One of the most exciting parts of the ColLAB model is that students will continue to develop their research projects and language skills over the academic year with the support of the lab. A group of both new and returning students will travel back to Tanzania with their mentors in summer 2019 to partner with students from the University of Dar es Salaam. As the Kansas African Studies Center just received word that it has received a grant for over two million dollars from the U.S. Department of Education, KU undergraduate and graduate students will be able to apply for competitive full tuition Foreign Language and Area Studies (FLAS) fellowships to study the Kiswahili language over the academic year and summers for the next four years. Students, alums, and community members can also expect a full docket of fantastic speakers and events on the horizon.

Students interested in learning Kiswahili, applying for a FLAS Fellowship, or participating in colLAB should contact kasc@ku.edu.