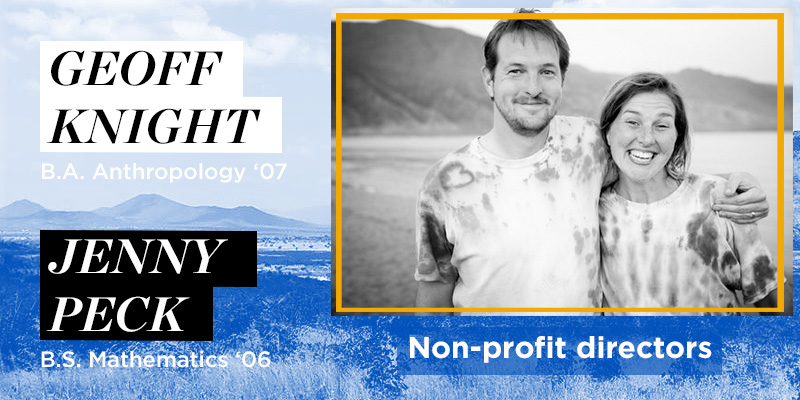 Why Jenny and Geoff are Hawks to Watch:

When Jenny Peck was placed in rural Tanzania as a Peace Corps Volunteer in 2006, the plan was to stay for a couple of years. Plans change.

Jenny’s partner Geoff Knight had followed shortly after Jenny arrived, and the couple felt so at home in Mufindi that two years became twelve. During this time, these KU College grads dedicated their energy and skills to directing Mufindi Orphans, a grassroots organization in rural Tanzania working with a community impacted by a very high prevalence of HIV to ensure care for all of its most vulnerable children and their families. Geoff and Jenny’s work has largely focused on developing long-term sustainable projects with the community. And they’ve also helped build bridges between Lawrence, Kansas and Mufindi, hosting KU researchers and students who want to learn more about the project, including a visit from scholars involved in KU’s ColLAB project in the summer of 2018. Now back in the States, Jenny is working for a non-profit called Global Health Corps in New York, and Geoff is working with the projects in Tanzania, as well as jobs as in education research, and as a Swahili Interpreter. 10 years from now they aim to continue working hard on projects that simultaneously bring them joy, but also help others. 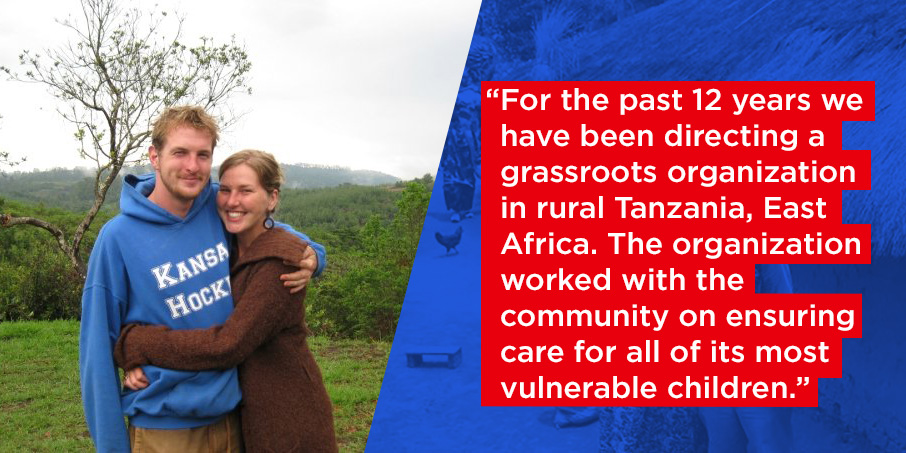 Now we are in New York where Jenny works for a non-profit called Global Health Corps, and Geoff still works with the projects in Tanzania, as well as jobs as in education research, and as a Swahili Interpreter.

How did you end up doing what you do?

In 2006, Jenny was placed in rural Tanzania as a Peace Corps Volunteer, and a few months later Geoff (always the romantic, and wanting to do something ‘different than Kansas’) followed Jenny half way across the world and took a job teaching English and music in the closest town. Neither of us thought we would be in Tanzania for more than two years, but the community was so warm and welcoming in Mufindi that we both just felt so at home. What we didn’t know, was that the community was going through a crisis. A combination of factors had created a very high HIV prevalence in the area, and the social fabric was ripping apart. When we were given an opportunity to stay on and work with the community on ways to repair this damage, we decided to do so, and over a decade later, we had four kids together, and we witnessed a community come out of a crisis period and on to the road to recovery. 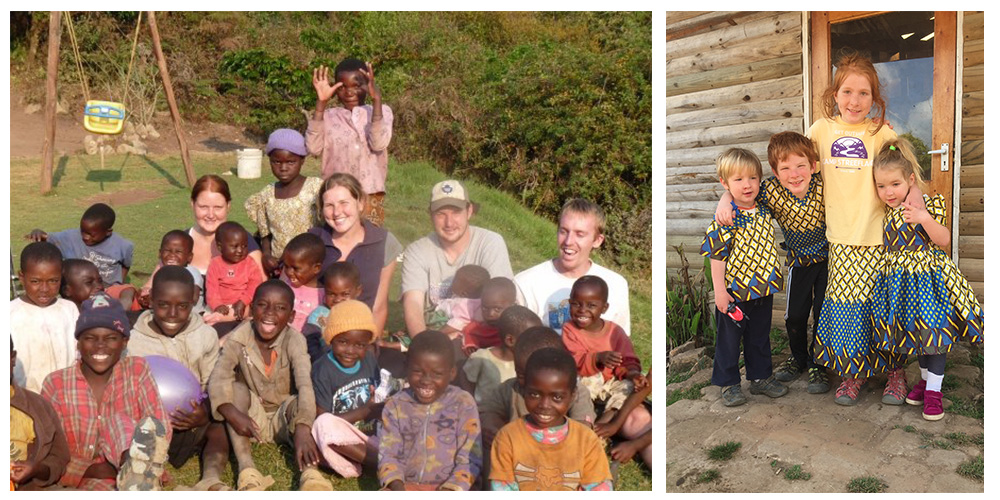 When we started work with a grassroots NGO in Tanzania, there was a lot of work to do, and it was difficult to even know where to start. The HIV pandemic had wiped out a generation of people and a community with a tremendous amount of agricultural/economic potential was buried under the burden of caring for sick family, or children orphaned by the virus. We knew that any initiative that was going to start to make a difference for this community needed a committed buy-in from motivated people. We were motivated to work with this amazing community and we decided to have two mantras: One, that we would stay at least until our oldest child was 5 (we didn’t have any kids at the time!); and two, that if we were doing our jobs right, we were working our way out of the job.

Often times wherever there is a crisis it can be tempting to dive in and do all we can, and longer-term impacts become lower priorities, but we knew that for any long-term sustainable project to work, Tanzanians would be the best advocates for their own people once given a voice. 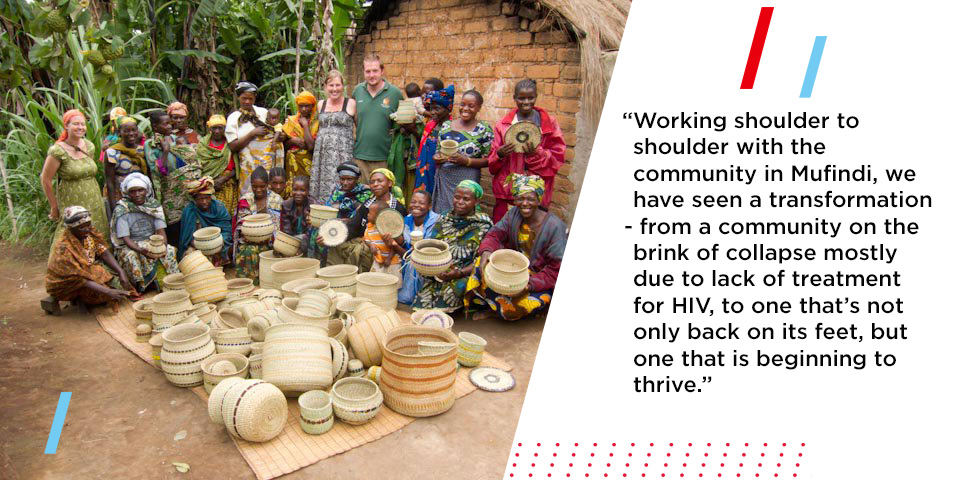 In 2006 there were likely less than a dozen people getting treatment for HIV due to the fact that transport to the closest facility for treatment was too expensive, and too far away. Today, and after harnessing the good will of the community, and stakeholders from around the world, a Care and Treatment Clinic has been built in the community, life-saving equipment supplied, and over 5,000 patients have received treatment in their own community. HIV/AIDS is no longer a death-trap for this community, and more kids are in school than ever before; more farmers are creating food and income for their families; and more shops and services are open for business. The senior staff of the organization in Mufindi is now comprised of former students of Jenny’s from Peace Corps, and community members from Mufindi. When we look back this year on what has been achieved over the past 12 years, we believe we achieved success through staying true to our two mantras.

In 2010 our projects had really started to make a difference as the community was getting back on its feet and real developments were happening for families. But then we had a devastating blow where four infants in our project area passed away inside of a three weeks. The problem was malnutrition as their Mothers had either passed away or could not produce breastmilk due to complications of living with HIV. Still, everyone pulled together and shared ideas on what to do based on what was needed and a new program was formed which helped new mothers with milk powder formula. All of us had to be sure this was done appropriately as research showed this type of project had failed in other communities in the past. So everyone in the organization contributed to producing a program that saved lives and kept babies healthy. To date, hundreds of kids have had a healthy start to their life from this program.

Ten years from now we would still like to be a part of something that makes a difference for the good of people. We are aiming to work hard on things that bring us joy, but also help others. It would be fantastic if we were in a position in career and life to be living part-time in the US/Canada and part time elsewhere in the world, working with a community again, building-out models and strategies to address individual community needs.

Jenny: There’s going to be people who might try to squash your dreams along the way- stay true to yourself and don’t listen to anything that doesn’t serve you! 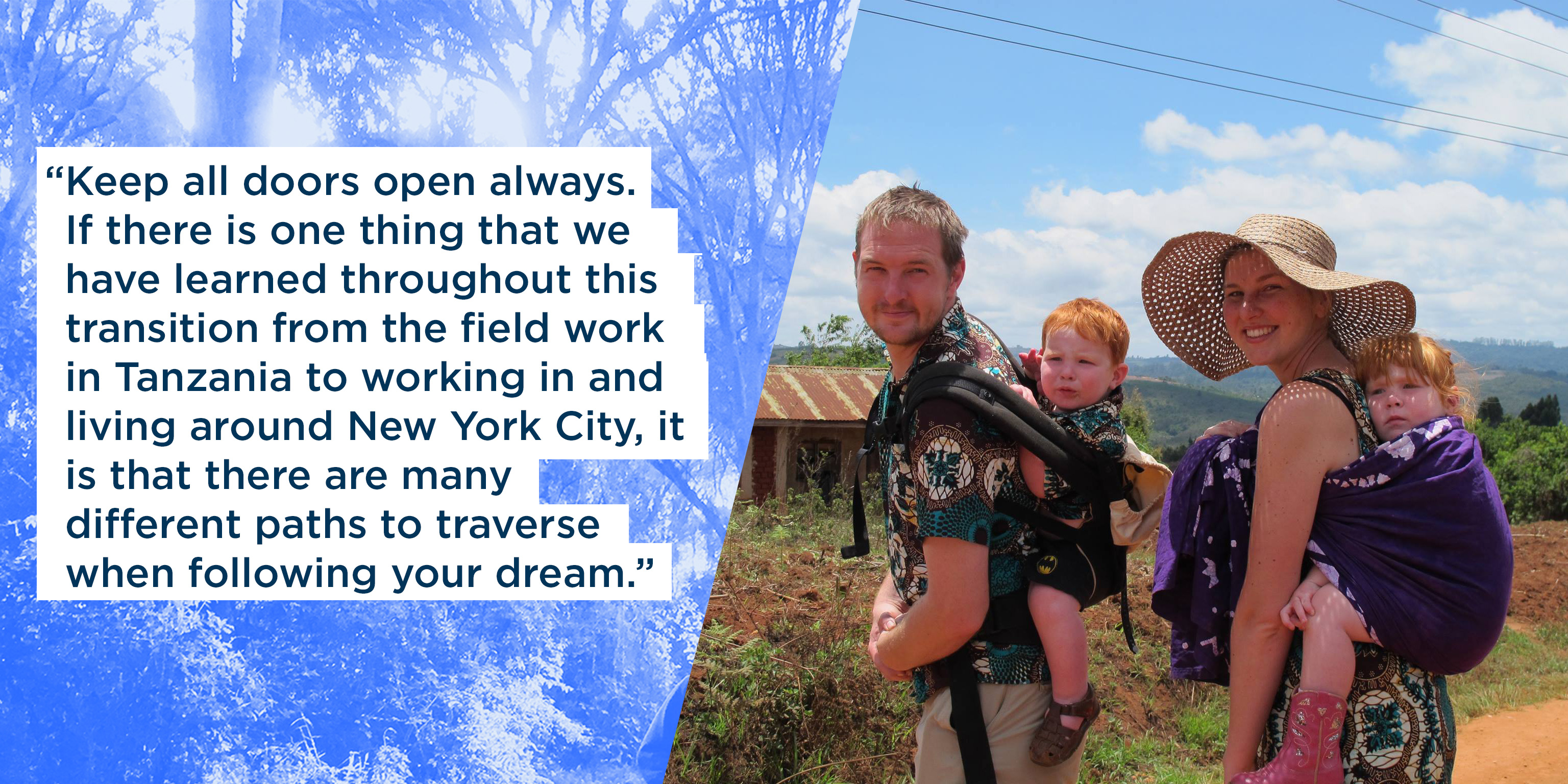 Also, when working with people, give them the benefit of the doubt. When working with someone, always enter with the assumption that they mean to do good, and let them prove you wrong before you shift to the attack.

Dream Big! A lot of people will tell you something is impossible, but the bigger you dream the more will become possible! 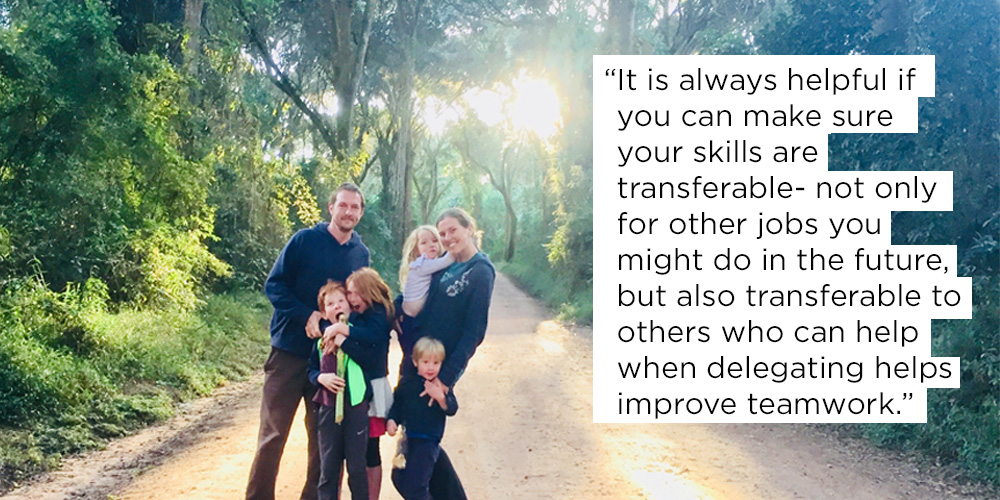 Finally, one of the best pieces of advice we’ve ever had from mentors of ours is “if it were easy, it would have already been done.”

Jenny: I started out in chemical engineering with a pre-med emphasis, but after I met an amazing math Professor, I realized that someone’s passion for a subject can really influence my direction. In Tanzania my math students brought me to their homes and I met families struggling with their health, and the passion those kids had for their community, I believe, helped led me towards public health. 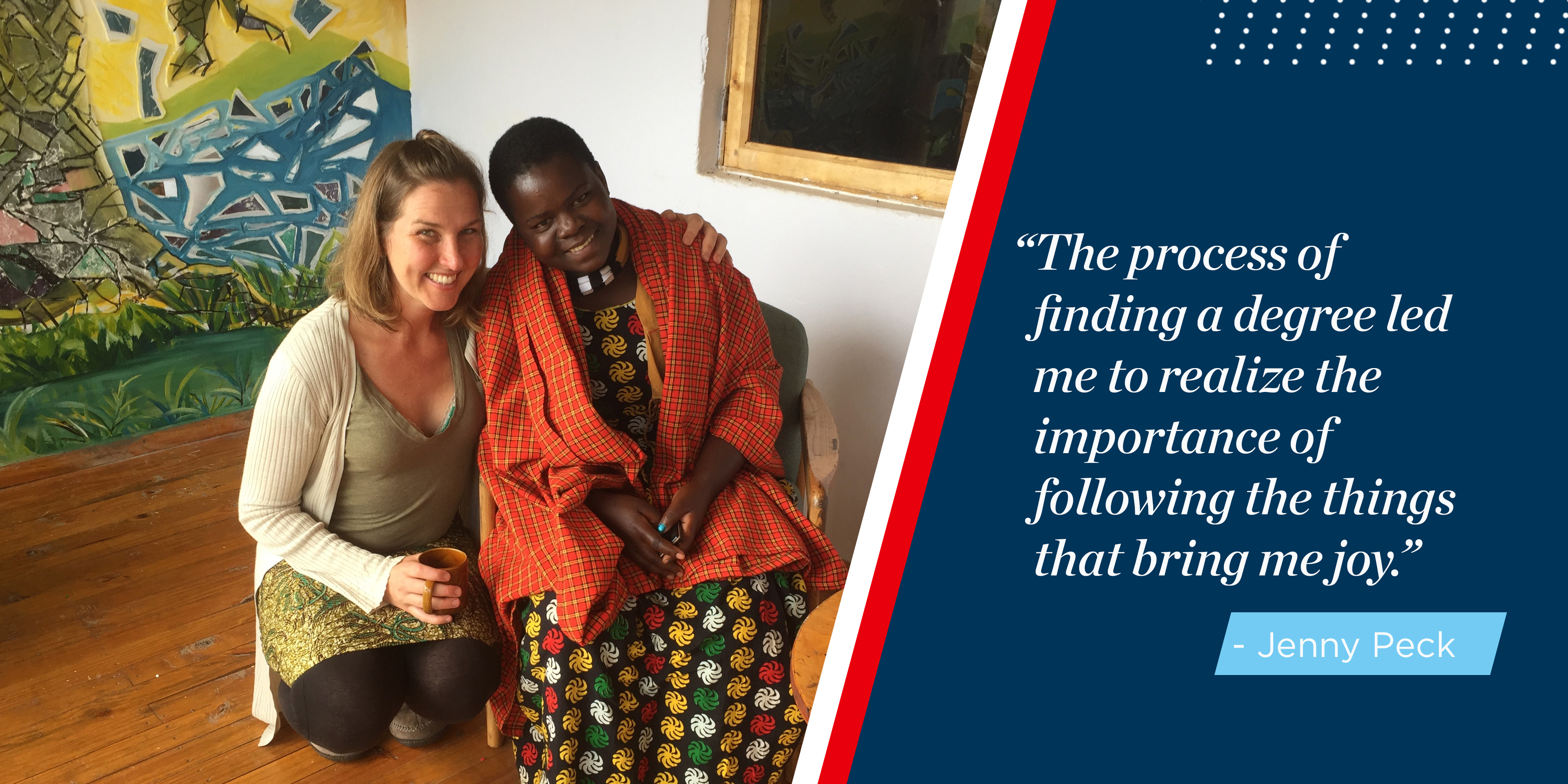 Geoff: I will be the first to admit that I made lots of mistakes as I was learning, and I like to think that Anthropology helped me to be aware of those mistakes, and to make amends in the best way possible. From a professional standpoint, being active in activities while at KU helped enormously as well. Being a leader in the KU Hockey club program, there was no way any one person could manage and run the whole organizing of that program. We all took pride in doing our part to make the whole experience better for everyone. I think I learned a lot about my leadership-style from that, and strangely enough, the same skills that I gleaned from being part of the team that set out the logistics of getting 20 or so knuckleheads to a set of road games in Pekin, Illinois, (where we all had a great time and stayed safe) actually also helped me being part of the team that got health care treatment for a community that was grossly underserved due to muddy roads and under-resourced medical systems. 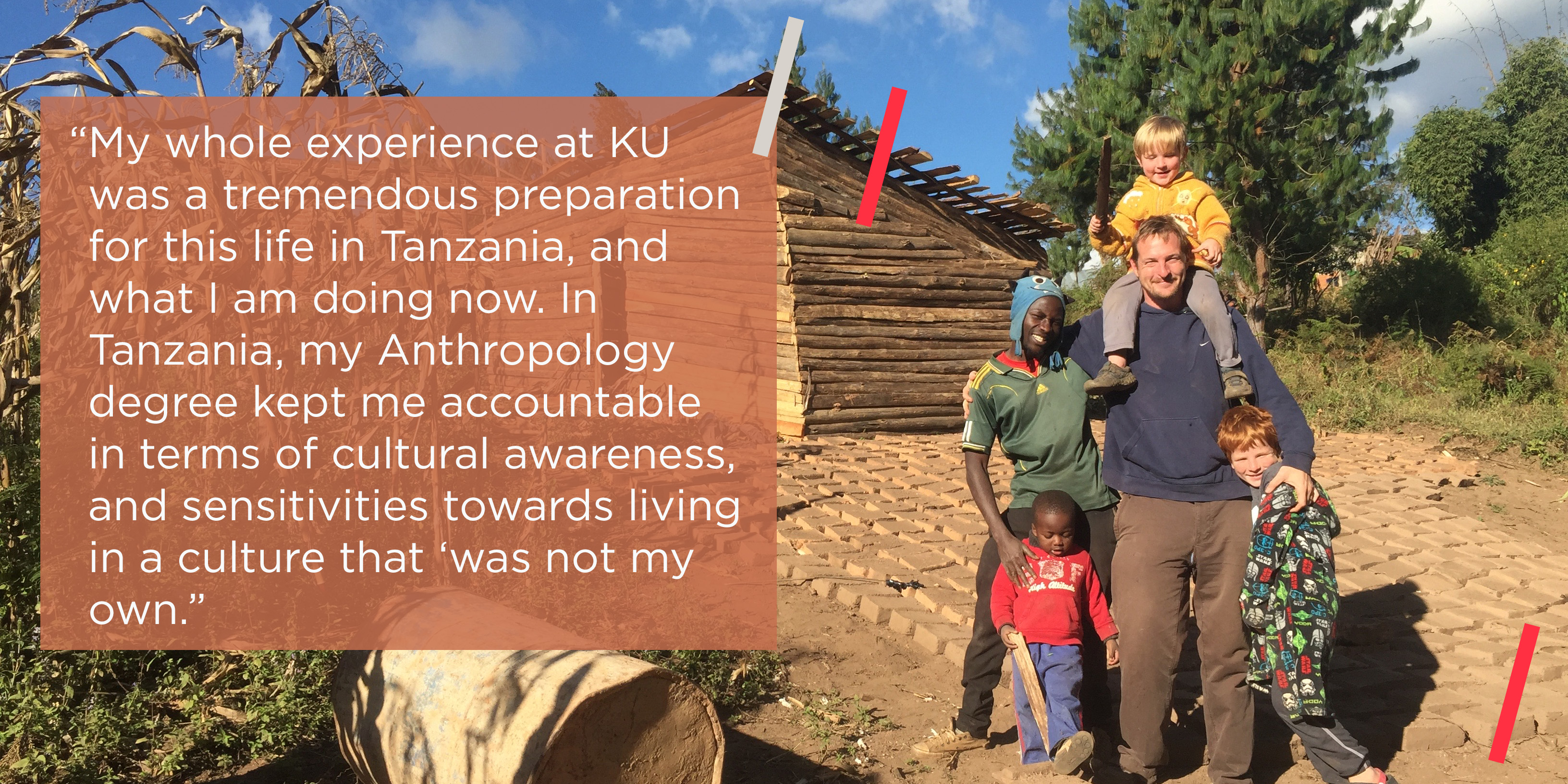 Jenny: I discovered yoga after the birth of our twins, and I really fell in love with everything about it. I even got yoga teacher certified at Om Tree in Lawrence, Kansas that was truly life-changing.

Geoff: I was born and spent most of my childhood in Canada, and therefore keep a stereotypical birthright to playing and loving hockey. There is not (yet) a big hockey scene in Tanzania, so my love of playing music as a way to unwind really increased there. 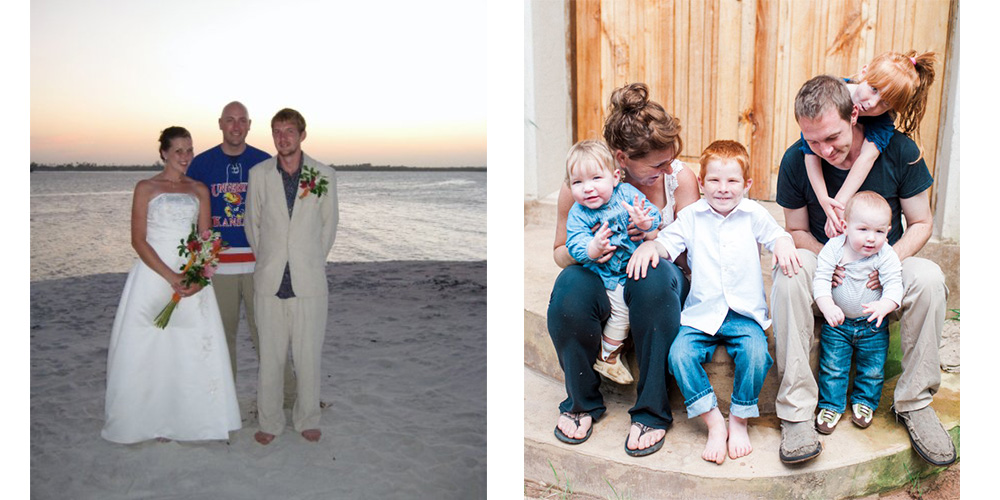 In fact, in recent years, to find a way to have another focus other than the sometimes overwhelming nature of our work in Tanzania, we started a band! We are called the Mufindi Misfits and we have played a few shows, and we plan to one day embark on a world tour! You can tell by now that our music mantra is “our heads are bigger than our talent!” 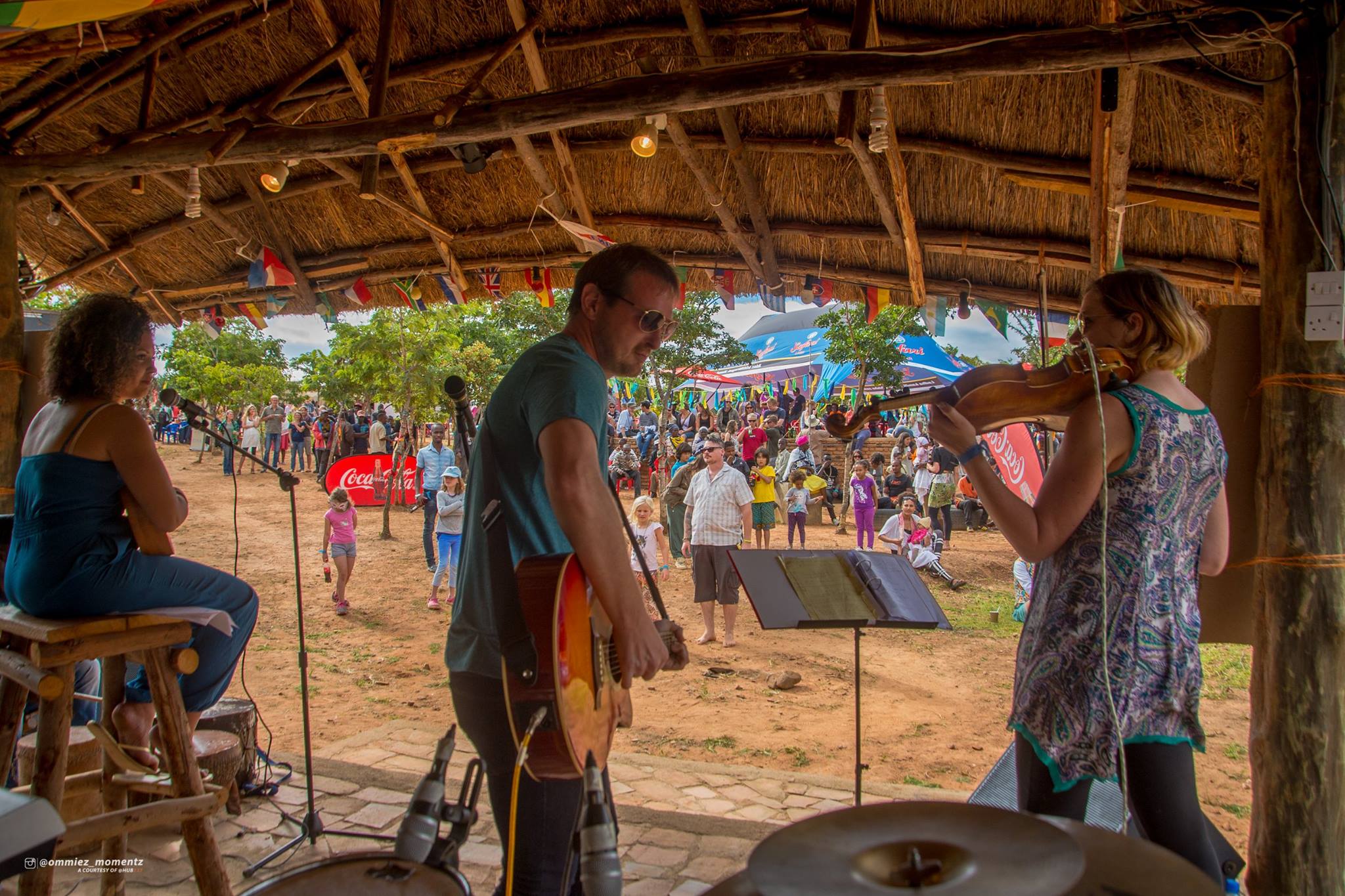 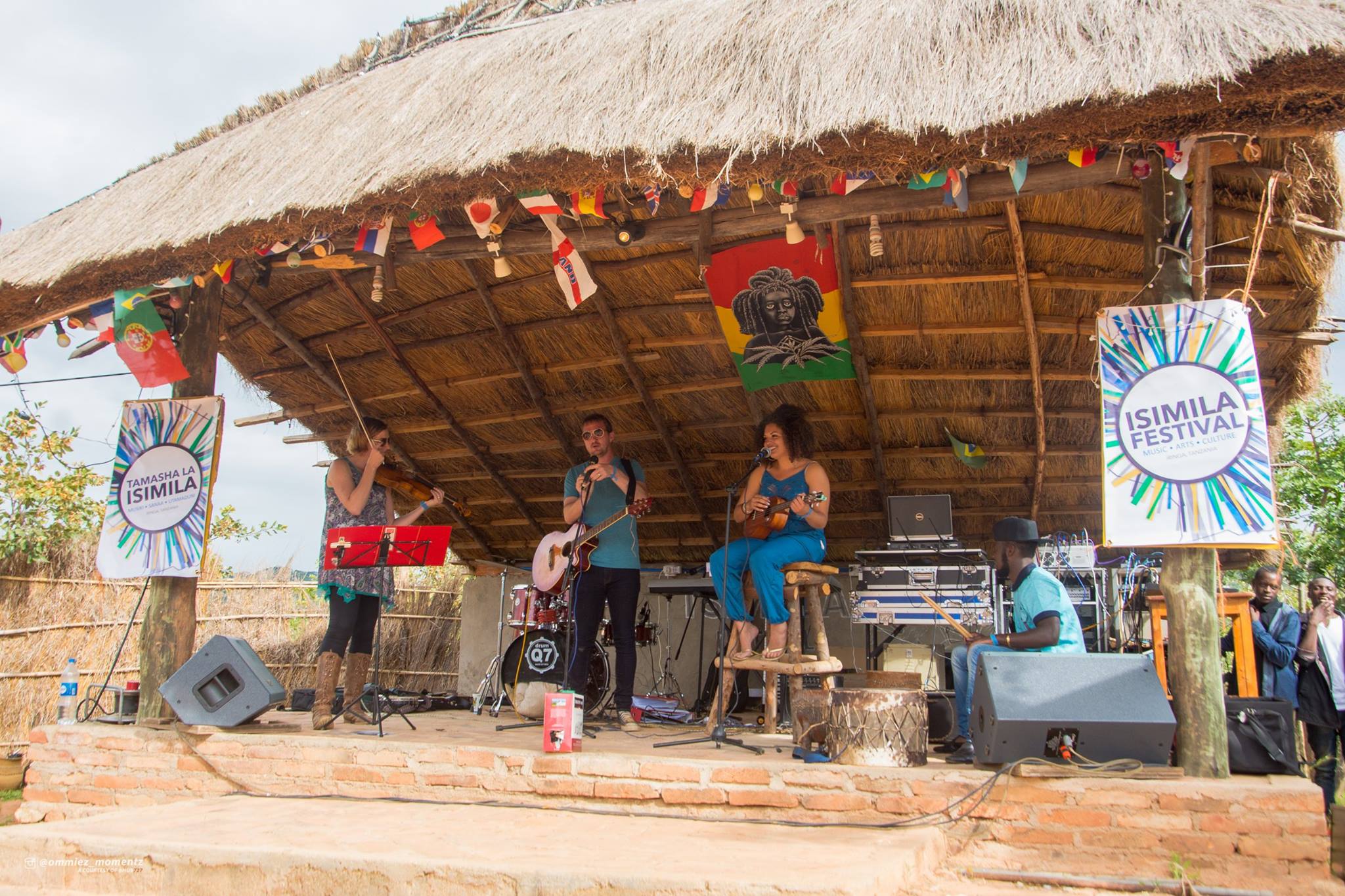 Be like Geoff and Jenny. Here’s more information on studying anthropology and mathematics at the University of Kansas.