Why Spencer’s a Hawk to Watch:

Who hasn’t dreamed of taking a trip to Sesame Street? The air is sweet, the neighbors are friendly, and everything’s A-OK. But, how to get there? One answer is to become a puppeteer, like KU College alum Spencer Lott, our latest Hawk to Watch. Spencer developed a passion for puppetry while studying for a degree in theatre at KU. Since graduating he has landed work on Sesame Street and America’s Got Talent, as well as a chance to perform as a Muppet at the Macy’s Thanksgiving Day Parade. To add to that, Spencer’s contributed his skills as a puppeteer on music videos and TV commercials on both sides of the Atlantic and has written, directed and performed in several films including his very own “Melvin the Birder.” Finally, this theatre graduate continues his thespian passions through his involvement with Trusty Sidekick Theater Company, a New-York based theater organization making adventurous theater for young people and their families. We can’t wait to see what this multi-talented artist does next!

I am a puppeteer, a director and theater maker. I create original plays for young audiences with Trusty Sidekick Theater Company and I puppeteer on TV. 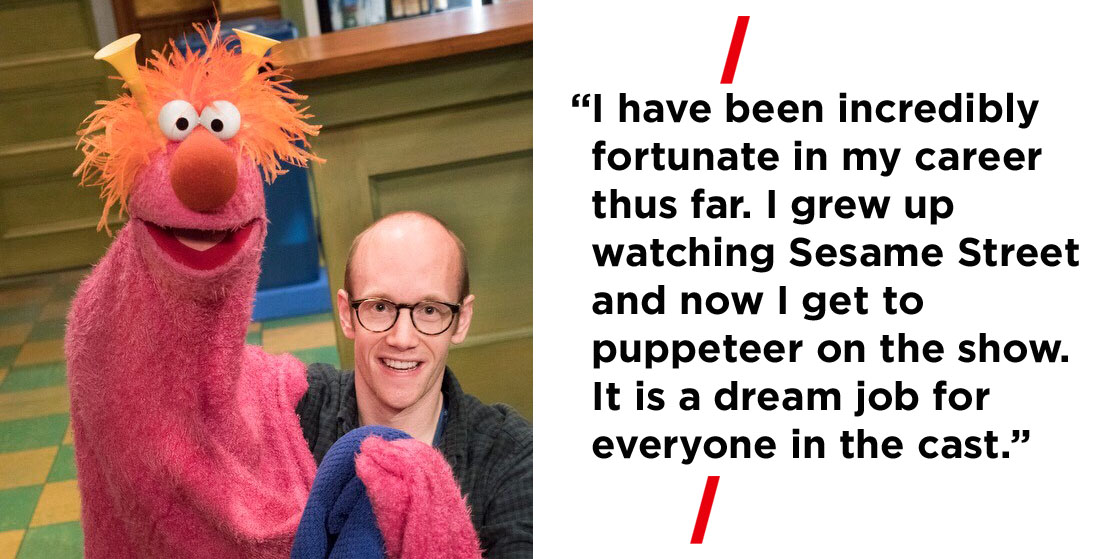 I was fired from my first job as a professional puppeteer after I graduated from KU. I had signed a non-compete, so I couldn’t do any puppetry work in Kansas City for a full year. After a few failed auditions in NYC, I spent the next nine months serving pasta at a chain restaurant on the Country Club Plaza. It shook my confidence but it forced me to re-evaluate my goals and the trajectory of my career. With support from my family and my wife I started focusing on getting work in NYC. I would save up money and then fly back and forth to NYC for auditions and puppet-building gigs. I had very generous friends who let me stay on their couches for weeks at a time over the course of a year. In one magical moment, I landed a spot in a workshop of a new play with a young company called Trusty Sidekick Theater Company. Less than four years later, I would be on stage in the New York premiere of the same play at Lincoln Center. Last year, I became the associate artistic director of that same company. 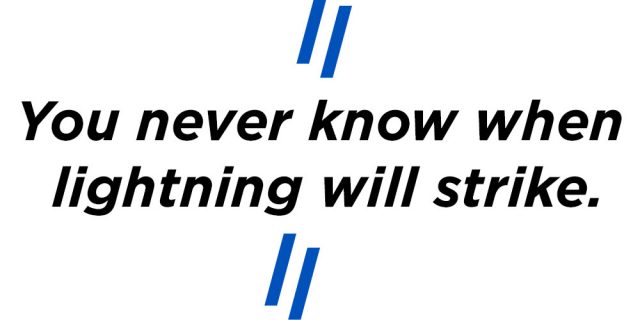 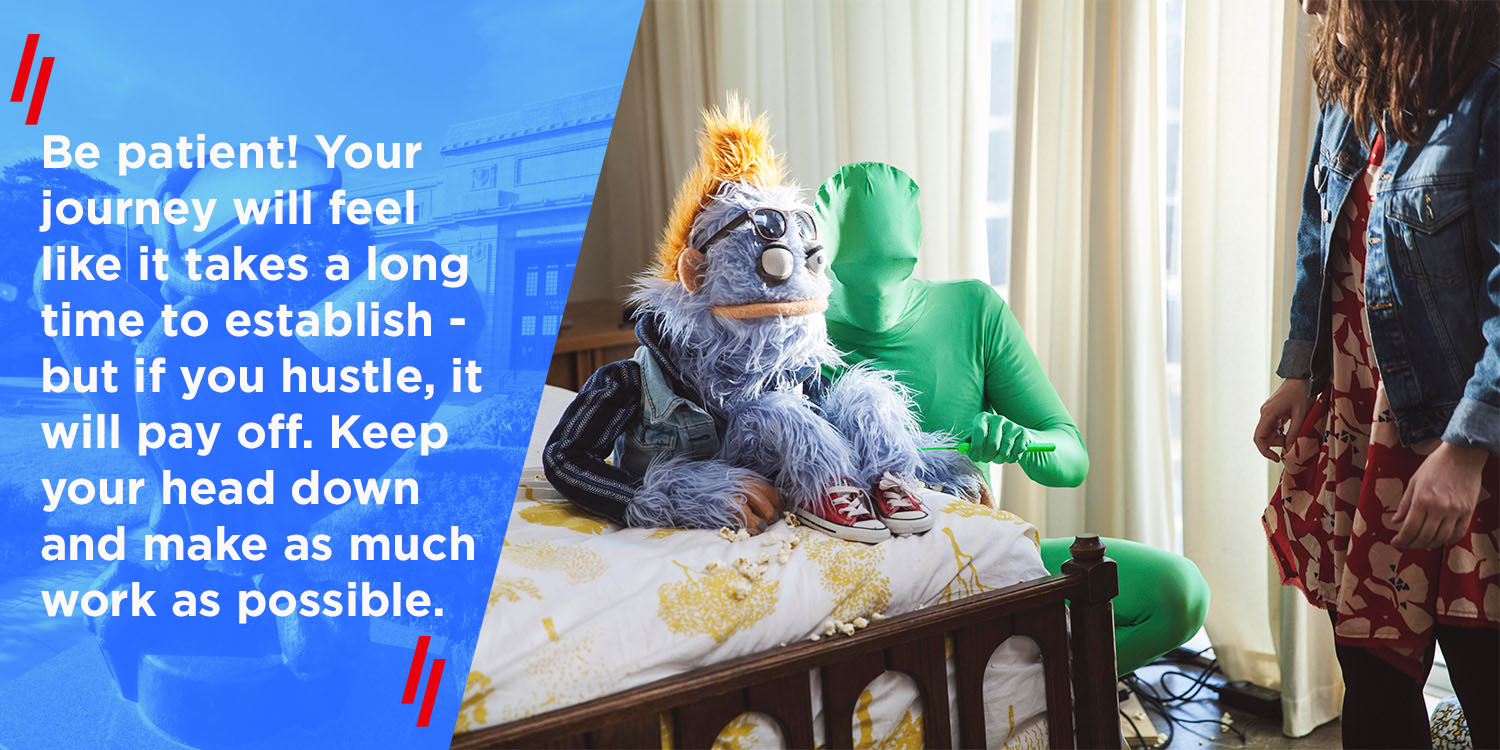 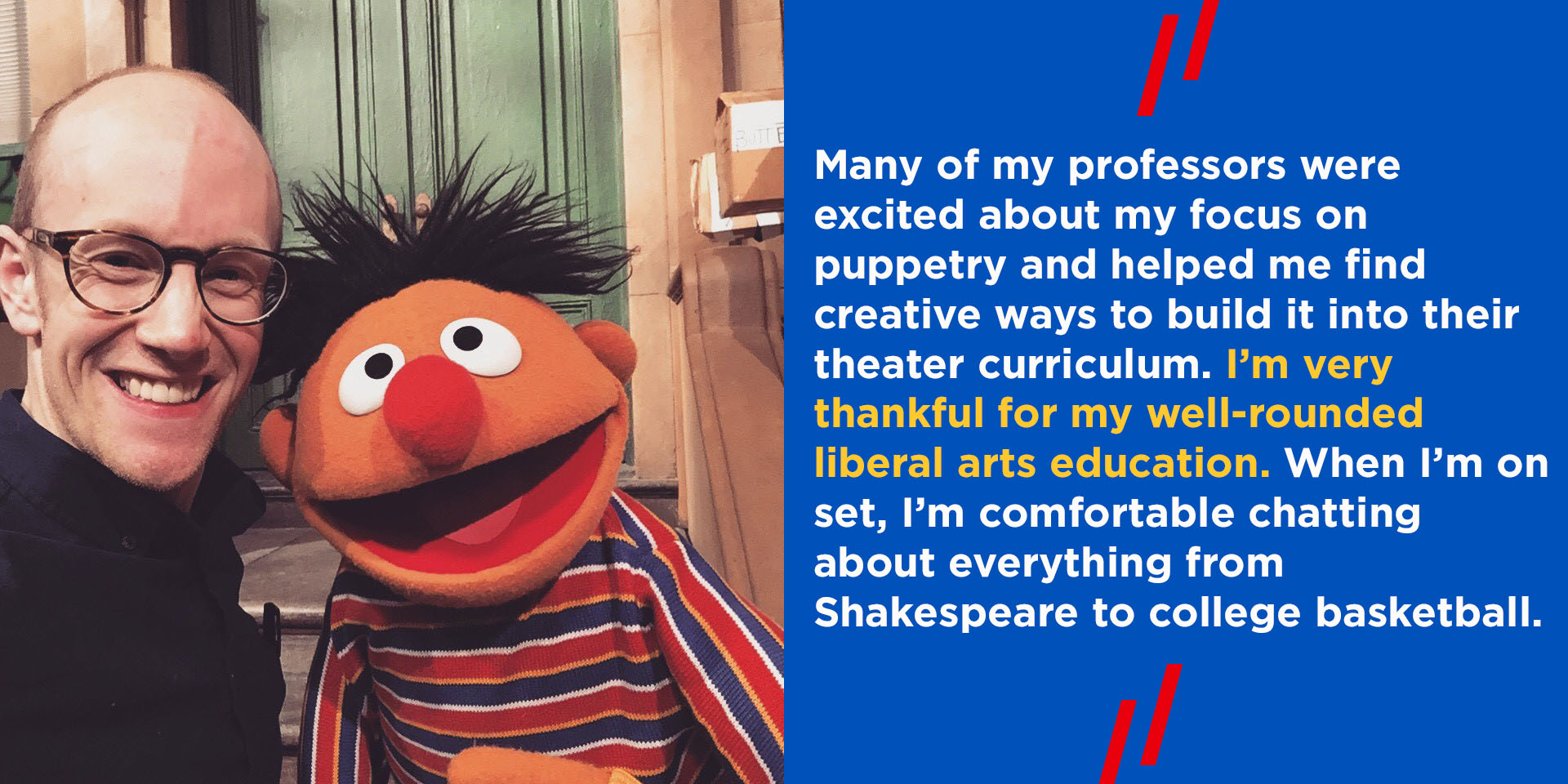 So many skills are useful when you are a puppeteer – acting, directing, costume design, filmmaking. Every gig is a little bit different than the next, so the bigger box of tools I come prepared with, the better my chances of success in rehearsal or on set.

Be nice to everyone you meet.

I hope to be producing my own original stories (perhaps TV, theater, or books) for young people and in the midst of some artistic collaboration with my wife (who I met at KU!)

As a freelancer, it is hard to clock out at the end of the day, but I have an incredible wife who makes me get out of the studio and relax. Together, we go on adventures around New York City and have been doing some traveling. I see a ton of theater and we love hosting parties in our tiny Brooklyn apartment with our fancy cat named Colonel Mustard.

I’m going to steal my wife’s fun fact – her Godfather is Fred Rogers. My in-laws are writers and developed a friendship with him. He was even a part of their wedding ceremony! My wife and I share a small artist studio and we have a framed headshot of Fred that he signed “With love from your real friend Mister Rogers.”

What would be the soundtrack to your life?

My soundtrack would be an eclectic playlist – It would include a few songs from St. Vincent and Sylvan Esso and then perhaps a little Dirty Projectors. I’m getting into French Ye-Ye and I’m on a Yo-Yo Ma kick right now as well. Of course, somewhere on the mix would be Ernie singing “Put Down the Ducky.”

Be like Spencer. Here’s more information on the KU Department of Theatre.

Check out Spencer’s website for more about the incredible work of this Hawk to Watch.