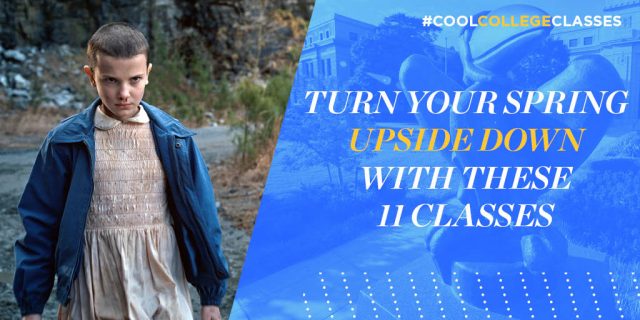 Netflix’s Stranger Things may be taking the year off, but we’ve got you covered in the meantime. Check out our list of College classes (plus one from our friends in the School of Music!) you can enroll in, and find something to pique your interest, whatever your style is – whether you’re a Steve, a Nancy, a Dustin, or more of a Barb. (We’re still crossing our fingers for a Barb comeback!)

Q: How many classes are we including on our list?

The Stranger Things crew found their quiet lives in Hawkins, Indiana disrupted by supernatural forces and dangers out of a vivid nightmare – paranormal experiments, Demodogs running loose across town, awkward school dances. If you’re a lover of all things spooky, supernatural, and paranormal in fiction, take a closer look at sci-fi as a literary genre in ENGL 506!

The development of science fiction as a literary genre, and as a literature of ideas for a future-oriented society. Satisfies: Goal 6 Outcome 1 (AE61) ,  H Humanities (H)

Speaking of sci-fi nightmares, if the wait for Season 3 of Stranger Things has left you hungry for a dose of mutants, monsters, and general mayhem, consider taking Aliens & Monsters in French and experience close encounters with the supernatural, the undead, and the all-around strange. Se méfier!

A comprehensive, interdisciplinary survey of the treatment of the Other in French culture in different ages that may include vampires, zombies, fairy tales, villains and anti-heroes, the macabre, alien encounters, dystopias and utopias, and deviancy, with particular attention to literature, film and TV, and thought. Taught in English. Does not fulfill any requirement in the French major or minor. Satisfies: Goal 1 Outcome 1 (GE11)

Ah, childhood –an interesting time in life for sure, full of life lessons and challenges. It’s all the more interesting when those challenges include: scheming to stop Shadow Monsters, running from the authorities with your psychic posse, and getting to the bottom of top-secret government experiments. Luckily, most of us experience no more than one of those problems growing up (two at most). If you want an overview of childhood development and behavior from birth to adolescence, look no further: Intro to Child Behavior and Development is for you.

Dance can move you in all directions – to the left, to the right, backwards, even… Upside Down (Get it?). Get moving with KU Dance Department in Intro to Classical East Indian Dance, and sharpen your dance knowledge and abilities! (We promise it won’t be like an awkward school dance.)

Classical East Indian dance has an extensive movement vocabulary that emphasizes the coordination of rhythmic foot patterns with intricate hand gestures. Students will learn the mudras (hand gestures) and their significance and integration within each dance. Readings will include excerpts from the Natya Sastra and other treatises of East Indian dance and culture. Satisfies: Goal 4 Outcome 2 (AE42) ,  NW Non-Western Culture (NW)

After her escape from the laboratory, Eleven had to develop communication skills and learn the everyday language necessary to connect with others in a society that was new to her. Explore the ways that language connects cultures in Language in Culture and Society.

Language is an integral part of culture and an essential means by which people carry out their social interactions with the members of their society. The course explores the role of language in everyday life of peoples in various parts of the world and the nature of the relationship between language and culture. Topics include world-view as reflected in language, formal vs. informal language, word taboo, and ethnography of speaking. Satisfies: Goal 4 Outcome 1 (AE41) ,  Goal 6 Outcome 1 (AE61) ,  S Social Science (S) ,  SC Culture & Society PC (SC)

It should be obvious that the techniques employed by Martin Brenner (a.k.a. “Papa”) and his team at the military base, which include bizarre bodily and psychological experiments, fall short of what medical experts deem to be ethical practice. But in some cases, the line might not always be so clear, especially in matters of life and death. Develop a better understanding of philosophical arguments on all sides of hot-button medical issues, as well as their implications, in Medical Ethics: Life & Death Issues.

After a brief survey of techniques of moral argument and analysis especially as they pertain to the moral impermissibility of murder, particular moral and conceptual issues relating to death and dying in medical contexts will be addressed. Topics such as abortion, infanticide, suicide, euthanasia, the definition of death, and the right to refuse life-saving medical therapy will be included. Prerequisite: Two courses in biology or consent of instructor. Satisfies: Goal 5 Outcome 1 (AE51) ,  H Humanities (H)

You don’t have to have psychokinetic or telepathic abilities to be considered an outcast from society. Deviancy applies to a wide range of traits, actions, and behaviors that are generally frowned upon and violate social norms. In Being Deviant in America, you’ll explore what exactly it means to be deviant in the United States and society’s ongoing quest to “deal with” deviancy.

In this course students will study traits, conditions, actions, and behaviors that violate social norms and elicit negative societal reactions. This includes the social, cultural, and individual factors that explain deviance; motivations behind deviant behavior; and efforts by society to control deviants. In short, you will undertake a sociological examination of those on the margins of society and societal efforts to “deal with” them. Satisfies: Goal 4 Outcome 1 (AE41) ,  S Social Science (S)

“Should I Stay or Should I Go?” by The Clash. “Africa” by Toto. “Elegia” by New Order. “Runaway” by Bon Jovi. The Stranger Things soundtrack is an eclectic mix of greatest hits from the ‘80s, including many notable rock and roll classics. Jam out with KU Musicology and discover the rich, and undeniably cool, history of rock and roll music, man. It’ll put the Rock in “Rock Chalk!”

Survey of the history of rock and roll, starting with its origins in rhythm and blues and continuing to the present day. Open to both majors and non-majors. Satisfies: Goal 3 Arts and Humanities (GE3H) ,  H Humanities (H)

Stranger Things is jam-packed with ‘80s nostalgia and pop culture references to big-screen blockbusters of the era, from the Goonies, to E.T., Ghost Busters, and Indiana Jones. Grab a big bucket of popcorn and get a front-row seat to the landscape of American pop-culture through cinema with Film and Media Studies. And please, no spoilers.

An interdisciplinary examination of popular cultural forms and their relationships with the social, political and economic dynamics of America, with emphasis on film, media, music, literature (including magazines and newspapers) and the graphic arts. The decade or other specific topic to be studied changes as needs and resources develop. May be repeated for credit for different decades or topics. Satisfies: Goal 3 Arts and Humanities (GE3H) ,  H Humanities (H) ,  HL Literature & the Arts PC (HL)

A broad introduction to religion in American culture. This class emphasizes the well-established religions with large followings (viz. Judaism, Catholicism, Eastern Orthodoxy, and Protestantism). Some attention is also given to other religions active in America. Other topics covered include the relationship of church and state, religion in ethnic and racial minority groups, and women and religion. Not open to students who have taken REL 172. Satisfies: Goal 4 Outcome 1 (AE41) ,  Goal 3 Arts and Humanities (GE3H) ,  H Humanities (H) ,  HR Philosophy & Religion PC (HR)

OK, how did Dustin’s pet Dart transform from a tiny slug to a giant cat-eating Demadogorgon so rapidly? While it may not address that example specifically, Principles of Organismal Biology will introduce you to the basics of organismal diversity, population biology, and principles of evolution!

Note: These classes are offered across all semesters. Check out the schedule of classes to see what’s available in upcoming semesters.